Walk into the woods now and you can feel it in the air. Things are just about to start happening.... 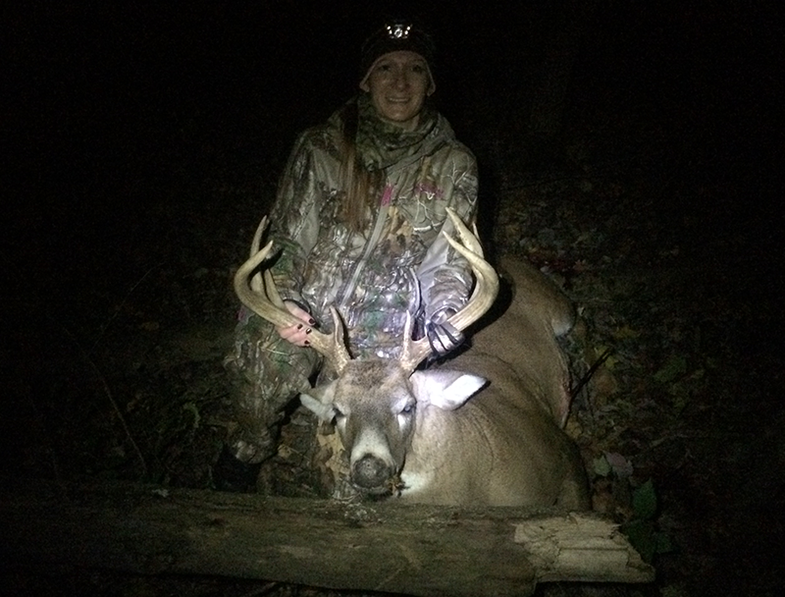 Walk into the woods now and you can feel it in the air. Things are just about to start happening. A pretty nice buck made an appearance on one of my trail cameras in Northwest Pennsylvania (more about that later) and on that same trail cam I got photos of some does, a fox, a raccoon, an opossum, a gray squirrel, and a robin.

Things have already happened for some hunters. Leah Goodrich, bowhunting in Ohio with her husband, Matt Goodrich, nearly did not go hunting late in the afternoon of October 10 because plans to get an early start went awry. It was fortunate they decided to hunt anyway. They got to their blind at 6:10 p.m., and about an hour later Matt noticed movement on the opposite side of a field. Whatever it was disappeared. The next 15 minutes or so were exhilarating.

The animal, a very good buck, finally appeared after 10 minutes. Any hunter who has gone through the approach of a nice buck understands how exciting it can be. They watched and waited for 5 minutes before Leah drew her bow with the buck at 19 yards. She had to maintain the draw another 2 minutes to 3 minutes before she released the arrow. The hit appeared to be good, but…

After an hour wait, they started looking for the buck. There was no blood trail. Fortunately they use lighted nocks. Likely they would have found the buck, but spotting the faint glow of the green nock from 90 yards through the underbrush shortened the process. The buck, shown above with Leah, is an impressive 8-point with an estimated dressed weight of 215 pounds to 220 pounds. It is her first deer in her second year of hunting.

“What an absolutely wonderful experience to share with a loved one!” Matt Goodrich wrote in an email.

It’s a good lesson for us all. When you are on a quest for antlers, hunt whenever you have time to hunt.

Rob Rogan, hunting in Connecticut, noticed an increase in buck activity midweek last. He said bucks, at least one a potential shooter, are traveling solo. He also found his first rubs and scrapes of the season.

From Jon Whitbred in central Pennsylvania we learn that he finally got some trail cam photos of big bucks this week. All were taken at night. From his observations, bucks are still in bachelor groups. He just found his first scrapes of the season, but has not yet seen any fresh rubs.

My trail cams in northwest Pennsylvania caught a decent buck for the first time since late summer, when one of them recorded a big 12-point.

It tripped the trail cam on October 8, at 4:14 a.m. The buck, shown here, was traveling alone. About 12 yards from the trail cam I found an interesting rub on a tree that’s about 3 1/2 inches in diameter. The rub shows strong tine marks. The tree has scars from being rubbed the previous year.

More young bucks also have been in front of my trail cams recently, too.

Read through the comments to the past couple of reports. There are differences from one area to the next, things happening sooner or later, with differing degrees of activity. But it is enlightening to observe the cumulative increase of deer activity: There is more rubbing, scraping, and serious sparring, and several more young bucks and some older bucks are showing up in front of stands and trail cams. This is a really fun time to be outdoors. The weather can be glorious, and the woods are coming alive.