Pockets of Velvet Bucks Remain Across the Region

The past couple of posts have reported and discussed the process of bucks shedding velvet from their antlers. In my... 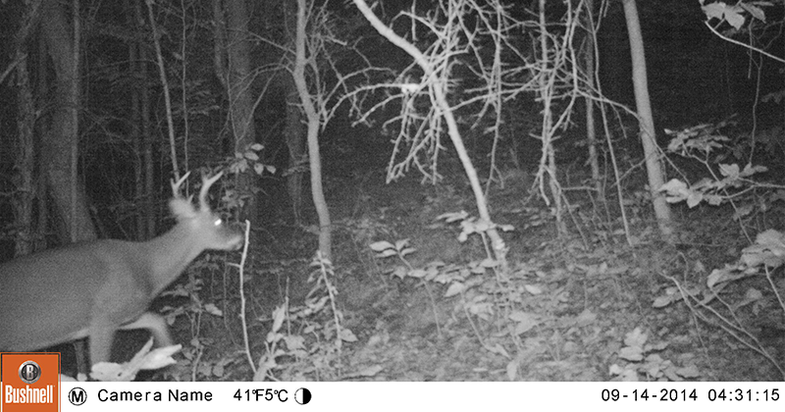 The past couple of posts have reported and discussed the process of bucks shedding velvet from their antlers. In my area, at least, the process may be virtually complete. During a drive Sunday from the Allegheny National Forest to near the Ohio border to check trail cameras, I saw does and fawns in fields through the afternoon. Bucks began to appear during the last 90 minutes before sunset. None were huge, ranging from spikes to modest eight-points. Every buck I saw—more than a dozen of them—had shed their velvet.

The buck shown here, a five-point that has shed its velvet, was caught on a trail camera very early in the morning of that same day in Crawford County, Pennsylvania. About eight minutes later a forkhorn with shed velvet was caught on the same trail camera.

From personal experiences and from what other hunters who watch deer a lot have told me, most of the bucks in any given area shed their velvet in a matter of one to three days.

Thanks to John Carter of Harrison County, Ohio, who wrote me to say that that all of the bucks he has seen recently have lost their velvet. He also reported three fresh rubs on brush. I will admit that I am envious of the way he casually writes about a 120-inch eight-point. I have hunted deer in his general area, so what he wrote does not surprise me, but that would be a MONSTER buck in my Big Woods home range.

But all this does not mean that all bucks in our Northeast Region have shed their velvet. Broken Arrow Archery Shop, in Newark, Ohio, reported on Monday that some customers who have trail cameras have said that some bucks are still in velvet.

The situation is the same at the southern end of New York’s Adirondack Region. John Havlick at Frank’s Gun Shop, Gloversville, New York, said that not all bucks are out of velvet. Most pictures from trail cameras show bucks in velvet. Although we do not know how frequently those trail cameras are checked, if those hunters are as anxious as most deer hunters, they probably are checked quite often.