Pre-Rut Action Heats Up in the Northeast

Photograph: Andy Steiner and his 2015 New York bow buck. It’s time to dust off your calls, as bucks are... 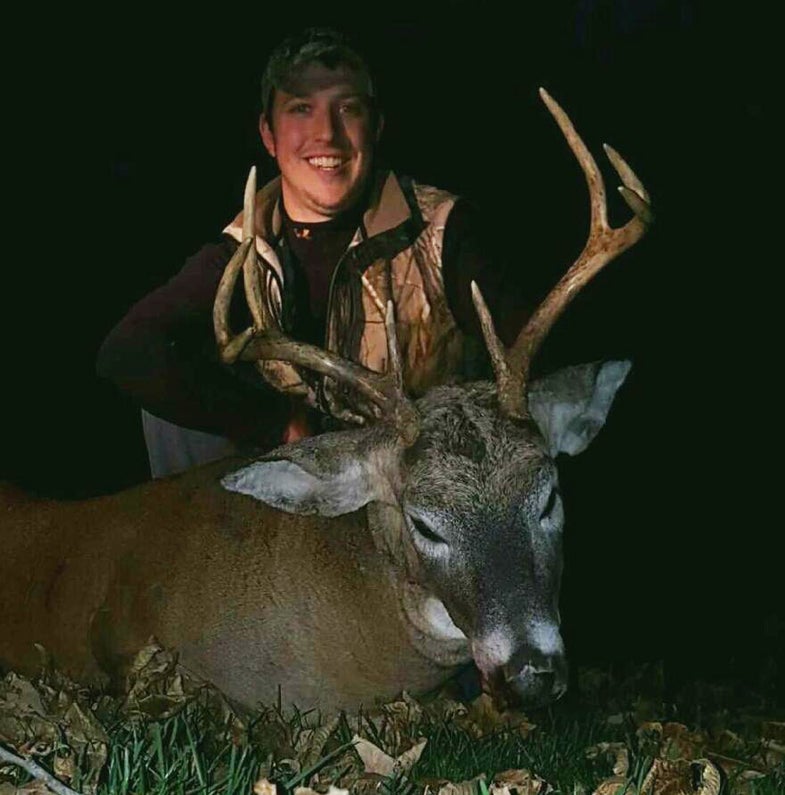 It’s time to dust off your calls, as bucks are coming to grunts and bleats from Maryland to Maine. But they might not be shooters yet. Small bucks are definitely hot and responding to calls, but reports of big deer moving during daylight are few and far between.

“Young bucks are rutting, chasing, and rubbing, but no one has seen anything big,” said Eric Tylutki, who hunts a wide swath of central New York. He watched a fork-horn destroy a sapling last weekend while his friend Andy Steiner shot a representative 2.5-year-old. But that buck was hardly rutty.

“He was bedded in a beech stand that was logged about 10 years ago, and now it’s just thick with pockets of briars and beech,” Steiner said. “You can see only about 40 yards into it, and he came to the edge, and laid down for awhile. He got up and just slowly picked his way toward an alfalfa field, and under my stand.”

It’s a good reminder that while rut action is definitely escalating, many bucks are still on that lazy October bed-to-feed pattern. Food and weather still trump breeding behavior—but not for long.

Overall Activity Status: By several accounts, acorns are drying up in areas that had a good hard mast crop. Deer seem to be returning to standing corn, green fields, and food plots. “I have friends hunting standing corn and hay fields, and they haven’t seen a deer since the first two weeks of the season, until this weekend,” Tylutki said. “Acorns and hickory nuts are still a factor, but they’re slowing down.” For the last couple weeks I’ve been championing green fields and apples, and many of you have confirmed that, but I’ve definitely seen a drop off in activity around my apple trees in the last week.

Fighting: More and more hunters are seeing small bucks sparring, and the intensity is ramping up. “On my cameras, bucks are still grouped up together, but they’re getting pretty rough with each other,” said Joe Winski, of Wayne County, Penn. “On one food plot, it’s all pictures of does, then 300 yards over on a different camera, it’s all bucks.”

Rub Making: Rub activity is picking up. Guys who are on a big buck are reporting good-size rubs and clear rub lines, while the rest of us aren’t seeing much. This tells me that the mature deer are still mostly hanging out in their established core areas, and haven’t gotten rutty enough to travel and mark up new territory.

Scraping: This is the first week that I’ve heard, from just about everyone, that deer are actively checking scrapes. Several hunters with mock scrape sets have watched 1.5-year-olds kick them up. John Hatfield, with Ithaca-based Wildlife Resolutions, watched a doe check a scrape along a field edge. “The little bucks are running through the motions, but I haven’t yet seen really big, hot rubs or scrapes,” he said.

Chasing: Little bucks have been harassing does for weeks, but mature deer, it seems, are lying low or just now starting to show some interest. Joe Winski’s uncle watched a 5.5-year-old northeast Pennsylvania buck run a group of girls around a food plot, before slinking back off into the woods. “He was absolutely scent-checking them,” Winski said. “But it was over pretty fast, and my uncle never had a shot.”

Estrus Signs: Solo button bucks are being spotted by hunters across the region. In most cases, breeding is still a few weeks off in the Northeast, but some early estrus does could turn on in the next week or so.

X-Factor: “Every hunt, I write down what I see,” Tylutki said, “and during the week of Halloween, I’ve killed eight bucks and have seen bucks over the years, or had different encounters with bucks.”

The x-factor for this weekend, and the coming first week of November will be the weather. Temperatures are expected to be warm, with lows most places no colder than the mid-40s. Many hunters I’ve talked with think that this could slow down the building rut activity—but that’s no reason to sleep in. As Will Brantly and Scott Bestul pointed out earlier in the week on Rut Reporters, now is the time to get out there for all day shifts.

“It’s just about the waiting game,” Winski said. “You just have to be in the woods. It’s the time of year when there might be no activity one day, then the switch flips and the next day it’s on. Right now, I think weather still trumps rut activity, but it won’t be that way for long, and you want to be in your stand when it changes.”