Rut Either Peaking or Winding Down

Last Saturday, the final day of the Pennsylvania archery deer season, Chad Foster had the kind of day we all... 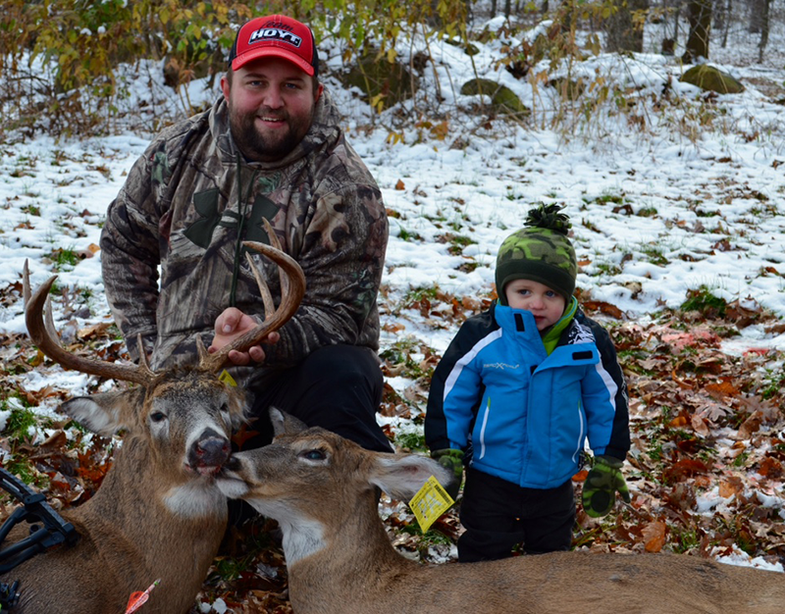 Last Saturday, the final day of the Pennsylvania archery deer season, Chad Foster had the kind of day we all dream about. The day started well enough, but was not without disappointment. Hunting on his parents’ farm in Mercer County, which borders Ohio, he got to his stand early and started seeing deer at about 6:30 a.m. A half-hour later he got the opportunity to fill his doe tag when a two-year-old doe came within 20 yards. He waited a couple hours before starting to trail it. In that time he saw 17 does and fawns, and seven legal bucks (the area has an antler restriction of three points up on at least one side). At about 8:30 a.m. he looked over his shoulder and saw the buck he had been hunting this season making a scrape at a distance of about 60 yards. He waited, and turned slowly, but a doe with the buck spotted him. Buck and doe were gone.

Tracking was easy with snow on the ground. He found his doe, which had gone just 75 yards.

At 10:00 a.m. he returned to the hunt for a buck. He decided to hunt from a different stand, which turned out to be a good decision. A doe was in the corner of a field at a distance of about 75 yards, but several oak trees gave him cover while he carefully climbed into the stand. The doe was acting nervous, but not because of Foster. The big buck he had hoped to take was approaching the doe. But the doe fed on acorns, moving away from the stand. Foster assumed the buck would follow. To Foster’s surprise, the buck instead followed a trail to within 30 yards of his stand. His arrow flew true. The eight-point with a 19 ½-inch inside spread, shown above with Foster and Foster’s young son, ran 50 yards before dropping.

Foster had hunted every day last week from dawn to dusk without seeing a good buck. He had not seen a good buck in nearly three weeks. He considered not even hunting on the last day, but in this case, persistence brought rewards.

What a treat it is getting comments from hunters. I agree with buckshot78 that this is a really good year for learning from our comments. I have been at this for more than 50 years and I am learning at an accelerated rate during a few years of writing for Rut Reporters.

Here is something I find interesting. Judging from the photos on my trail cams and from the deer I observe while out and about most days, the rut in the northwestern part of the Allegheny National Forest peaked November 11 through November 13, while the rut apparently peaked November 8 through November 11 in Crawford County, Pennsylvania. These areas are only separated by about 45 miles. The habitat between these two areas varies considerably. The national forest is rugged hills and big woods; Crawford County is more gently rolling terrain with a lot of agriculture. Soon I will check trail cams in McKean County’s big woods and Erie County’s checkerboard habitat, both in Pennsylvania, for more comparisons.

In southern Vermont, Marty’s Sports, Inc. reported this morning that the rut is peaking now. Customers reported seeing two, three, and four bucks chasing lone does. “We reported more deer this week than we have in 21 years,” Marty Harrington said. He attributed that success to good weather and snow on the ground.

In the Cumberland, Maryland, area, Westley Marks, owner of Marks Sporting Goods, said this morning that the rut peak is ending now. Scraping has stopped. Marks also hunts south-central Ohio, where he took a 130-inch buck this fall. He figures the rut peaked there from November 6 through 8.