Rut Past Peak in Most Areas, But Many Bucks Acting Otherwise

With the peak of the rut now history in most of our Northeast Region, relatively few does are in estrus.... 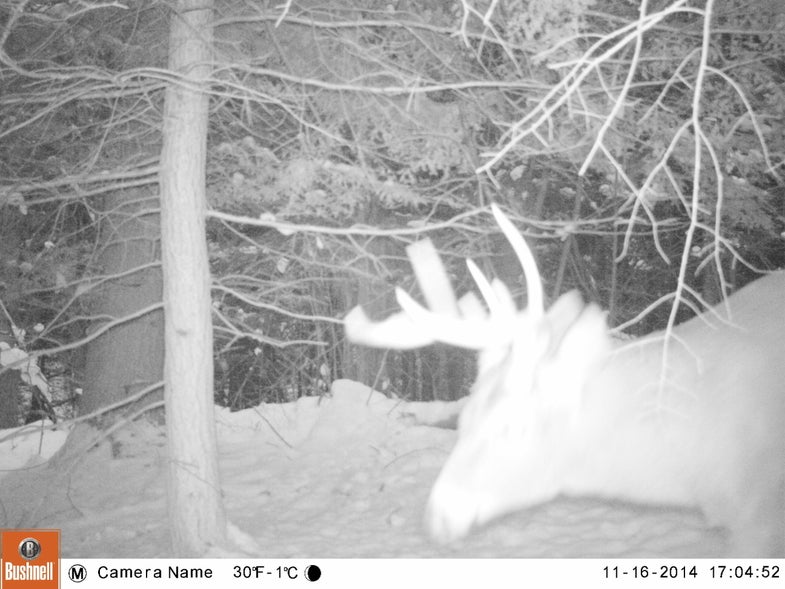 With the peak of the rut now history in most of our Northeast Region, relatively few does are in estrus. Bucks are not yet ready to give up the game, though. They are still looking, and some, such as this buck in a northwest Pennsylvania farm country woodlot, are still doing so during daylight. And they may still find willing does.

From the comments by rustyinmaine, I gather that the rut is past peak in southern Maine, but might not yet have peaked in the North Woods–inland northern Maine, northern New Hampshire, northern Vermont and the heart of the Adirondacks in New York. The comments from royalkangaroo and NH-HEADGEAR a couple of reports back appear to support this.

I love to hunt the North Woods, but finding deer is generally a challenge and a good amount of walking usually is necessary to get a handle on the stage of the rut, so I read comments from that region carefully.

RidgeRider17 figures the rut peaked during the first week of November in his part of New Jersey. That is about what we should have anticipated.

Rob Rogan reported Saturday that bucks are on the move in southern Connecticut, though the peak of the rut has passed. He also mentioned the dense deer population. This is a very important point, because the second rut peak can be pretty intense in places with high deer numbers. Some mature does will have not yet bred, and some yearlings will be coming into estrus for the first time in December.

Broken Arrow Archery Shop in Licking County, Ohio, reported today that things have been fairly quiet, especially with wind gusts to 40 mph. The rut peaked early there. Some bucks are still being seen during daylight, mostly from 9:00 a.m. to noon. It would be very nice to see more comments from Ohio, because it’s the monster buck capitol of this region.

Frank’s Gun & Tackle Shop, Inc., which gets customers from the southern Adirondack region up to the central Adirondacks, today reported that the rut started peaking over the weekend. That central Adirondacks area is part of the North Woods, so we might anticipate about the same timing, maybe slightly later in the region up to northern Maine. Customers have reported seeing active scrapes and chasing bucks.

We still have the second rut peak ahead, about 28 days after the first and more intense peak. In the meantime, hunting will be just fine. Bucks will be more responsive to calling and maybe scent trails, since bucks won’t be so preoccupied by does in estrus.

Congratulations to those of you who have already taken bucks, and good luck to those who are still hunting. Be safe.