Season Recap: A Growth Year in the Northeast 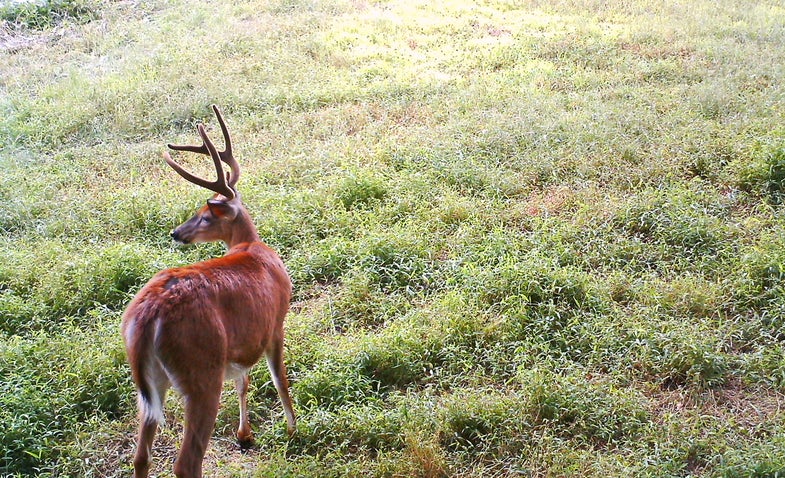 Don’t you wish we could back up to August 13?

This season flew by, as they always do, but 2015 was different for many deer hunters in one big way: the weather. From bowseason through muzzleloader, temperatures have hovered well above average. The end of the pre-rut and the start of peak breeding—those usually magic first two weeks of November—were particularly whacked out through most of the region, with daytime highs well above average and nighttime lows below the norm. What’s a buck torqued up on testosterone and wrapped in a fur coat to do but concentrate his energy on nighttime movement? From Maryland to Maine, the story played out similarly. Guys running trail cameras reported peak-rut seeking and chasing at night, and very little daytime activity to capitalize on.

The season wasn’t all bad, though. By many accounts, the warm weather kept deer on summer patterns longer, and many bowhunters were able to take advantage of first- and last-light buck activity straight through October. If there was a lull, I didn’t much hear about it. That last week of the month, for many, was the best hunting of the year, with skipper bucks running hard and several big deer getting out earlier and slamming into waiting hunters. Ohio, in particular, saw the death of many giants in the run-up to Halloween, including a possible all-time Pope & Young record.

Then the doldrums came: hot days and cold nights. Several hunters in my network saw more bucks on their feet, still acting rutty, on November 30 than they did on November 10. If I were to graph the rut based on the reports of big deer moving, it would be shaped like a barbell—heavy on the ends with little in the middle.

Deer food flourished across the Northeast. With such a warm, dry summer and early fall, agricultural did well, and, in most places, corn came off earlier than usual. Because the stalks were so dry, many of the ears broke apart when harvested, leaving large amounts of waste grains behind. Goose hunters first brought this to my attention, and, when walking a recently picked cornfield, the proof was not hard to see. Soft mast also boomed, with apples everywhere—trees so heavy with fruit that branches broke, especially in New Hampshire and Vermont. By the reports, hard mast was spotty. Below-average acorns were reported by the Ohio Department of Natural Resources, but there was seemingly a bumper crop in New England and New York. The few red oaks near my house, in central New York, didn’t drop much, but 45 minutes west on my deer lease, it was like walking on marbles the opening day of gun season. There were so many acorns in New Jersey this year that deer weren’t showing up at corn piles with any consistency. Andy LaBonte, a Connecticut state wildlife biologist, keeps up-to-the-minute track of his state’s deer harvest, and as of December 14, 7,533 deer had been taken. In that same window in 2014, 8,847 whitetails were shot—reflecting a 17-percent decline. He blames acorns. “In 1993, when acorns were most abundant, hunter success was one of the lowest recorded, and in 2004, when acorns were least abundant, the success rate was highest,” he said.

When it comes to mast, what’s good for deer is bad for hunters. As Len Kahle Jr. of the Hunting Western Mass. Facebook page told me, in a recent email, “Forget about food sources, because there’s food everywhere.”

Despite all the food and terrible weather—terrible, if you like deer hunting, not so bad if you favor t-shirts—the saving grace for many this late season has been the December rut. I’ve been fascinated by this topic as of late, and everything I’ve gathered shows that it’s fawns coming into estrus, not so much big does that “didn’t get bred,” as we’ve all heard 10,000 times. My buddy Nick Michael, out on Maryland’s eastern shore, saw this last week, and passed up a 3.5-year-old dandy with broken tines. The buck was cruising nose-to-ground looking for does. On Sunday, Nick’s brother saw several bucks grunting through a known doe-bedding area. “The rut never kicked on gangbusters down here,” Nick said, “but it started slow, and never really stopped. It’s been steady all year, and a lot of really good deer have been shot on the shore and in Delaware.” If you look at some of the peak conception studies put out by state wildlife agencies, you’ll likely see this phenomenon. Peak breeding dates for adults, yearlings, and fawns can stretch out breeding from early November through mid-December. Without those gangbuster first two weeks in November, hunters may have felt this much more this year, as they weren’t conditioned to showstopper rut activity early.

In New York and Pennsylvania, many hunters would tell you the second rut didn’t even happen; big-buck activity has been so slow it’s felt non-existent to many all season long. A deer processor in Western, New York, not far from Buffalo, told me last week that he should have 60 to 70 deer in his freezer. Right now there are 32. Other New York hunters have told me they expect the gun harvest to be down by 50 percent, or close to it. The total harvest won’t be down that much, but I’ll bet you my Bowtech it’s down by double digits. Still, some hunters have pulled a rabbit out of the hat.

In the last hour of the last day of the Pennsylvania season, my buddy Joe Winski shot the buck you see in the above summer trail-cam photo. While still-hunting big woods, he saw the buck bedded with a doe and a basket-racked 8-pointer. (Two bucks on one doe on December 13 in the Delaware River Valley.) Joe made an end run, to the other side of the mountain, and when he popped over the ridgeline, the buck was standing there. “I know this property like the back of my hand, so I knew where he’d go,” Winski said. “For me, it’s been my best gun season ever, but that’s not been the case for most guys around here. Overall, I’m looking at 2015 as a great growth year.”

That’s how I’m looking at 2015, too. I hunt with a small army of friends here in the Finger Lakes, and only one has punched a buck tag this year. In my area, if not the entire Northeast, the buck age structure got a boost this season. Next year, there will be giants. Let’s just hope Mother Nature cooperates.