Slow But Promising Changes in the Northeast

Overall Activity Status: The trail cam photo shown here, from northwestern Pennsylvania, illustrates the news: Does and fawns have been... 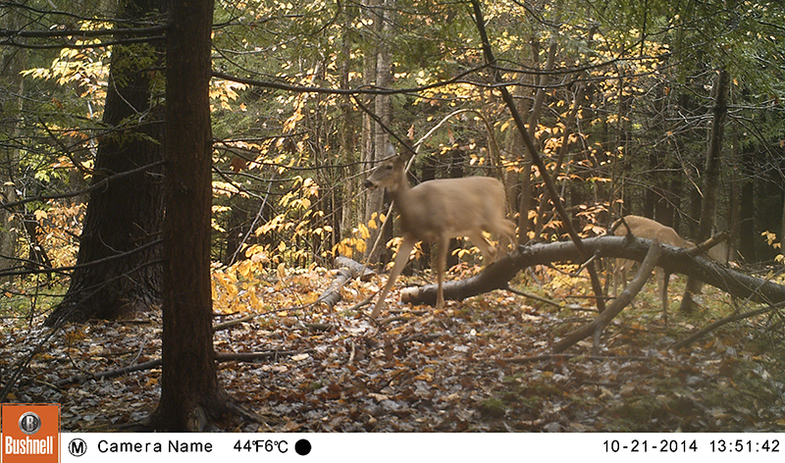 Overall Activity Status: The trail cam photo shown here, from northwestern Pennsylvania, illustrates the news: Does and fawns have been moving during the day in much of our Northeast Region. A few young bucks are in the mix.

Jon Whitbred, a resident of central Pennsylvania, has been doing a lot of driving the past week and half. “I have noticed a lot more road-killed deer over the past few days,” he told me in an email. “Most have been does, but I have seen a few smaller bucks.”

“Still much of the same on the cameras as last week,” Connecticut hunter Rob Rogan wrote in an email. “But a few young bucks have showed up hanging around the doe groups.”

Frank’s Gun and Tackle Shop, Inc., which is in the southern Adirondack region, reported the only activity has been at night but some big bucks have been seen then.

Marty Harrington at Marty’s Sports, Inc., in southern Vermont, said a few bucks have been seen just before and just after sunset. Kirk Rudzinski at East End Angler in northwest Pennsylvania reported an increase of road-killed deer along Interstate 79. But he has not seen daytime activity.

In my own travels, making the 200-mile circuit to check my trail cameras, only does and fawns could be seen during daylight hours. It is apparent that deer are moving more, though. Like Whitbred, I have been seeing more road-killed deer.

Fighting: No reports of fighting lately, but it is happening.

Rub Making: The 8-point Connecticut buck shown in the October 17 report has made frequent visits to a tree it has been rubbing, but only at night. Delaware Outdoors and Marty’s Sports in Vermont reported numerous rubs.

Scrape Making: Many scrapes reported from Delaware. Scrapes are just starting to be found in Vermont. Few scrapes have been seen in the southern Adirondacks. I have yet to see a scrape in north-central or northwest Pennsylvania.

Chasing: Finally we are seeing progression here. Delaware Outdoors reported a hunter watching a buck chasing a doe. Northwestern Pennsylvania’s Kirk Rudzinski said a spike buck was caught on trail camera mounting a doe, and a hunter killed a 7-point while it was chasing a doe.

Estrous Signs: A few does are in estrus, but the peak is one to three weeks ahead, depending on where you hunt.

X Factor: Changes really seem to be terribly slow. But a few does have come into estrous, and in most of the region some breeding has been happening. Many hunters have been anxious to use rut hunting tactics and tools. Start now if you have not started already. If there is a hot doe in the area around your stand, you should find out before long.