Still Some Surprises in the Northeast Deer Woods

Just when I thought I’d seen all of the bucks in one of my hunting areas, two bucks made an... 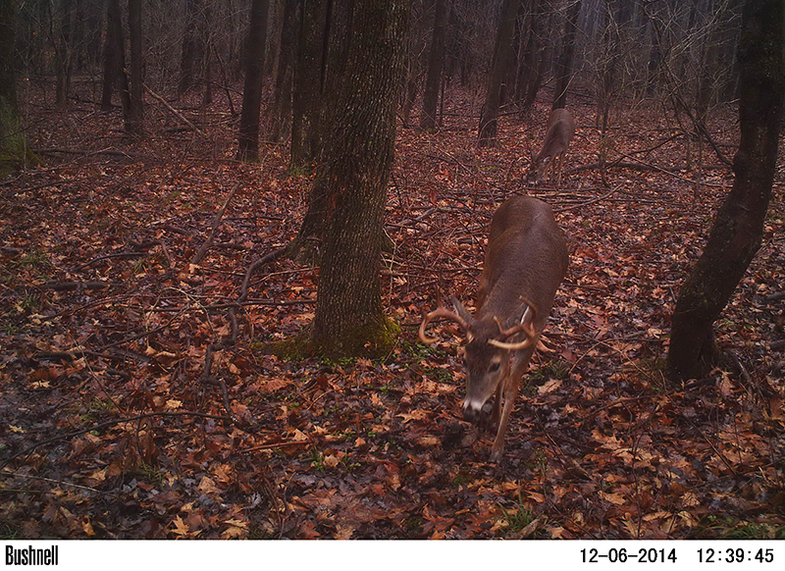 Just when I thought I’d seen all of the bucks in one of my hunting areas, two bucks made an appearance on a trail camera. Then two does appeared about two minutes later. Before trail cameras it took a lot of scouting just to get a fraction of the information that the cams provide. I think I’ll get a couple more. I must admit that I enjoy running trail cams almost as much as I enjoy hunting (and a lot more than I like dragging deer).

Daytime deer activity is down to near zero in all of the north-central and northwest Pennsylvania areas where I have been hunting, running trail cams, and driving. Trail cams do show that there has been some nighttime buck activity. There have been no signs of a second rut peak, which should have happened by now, or at least should be happening very soon. I have seen still more fresh scrapes, and surprisingly, more fresh rubs.

Comments from bisceglia, steve182, and Northeastsportsman describe largely similar situations. But then comments from ohiodeerhunter indicate a common occurrence–things are not the same everywhere in our Northeast Region.

Delaware Outdoors reported some daytime buck activity as the second rut peak is starting. There are fresh scrapes. Some chasing has been observed. Road kills have increased. One of their contacts in southern Delaware reported seeing bachelor groups.

S&S Taxidermy Archery in western New York reported that their second rut peak has passed. Some does and yearling bucks have been seen during daytime. There are no fresh scrapes or rubs.

Marty’s Sports, Inc., in Vermont reports good daytime deer activity. A second rut peak is near. Bucks have been seen cruising. Fresh scrapes are appearing. Their deer kill has been very good.

For those of us who never get enough deer hunting and who still have open deer seasons, newly arriving snow will make tracking easier. Bucks are still more than ready to breed, so rut-related hunting tactics can still be effective. Hunting will not be easy, yet plenty of great bucks are in the vicinity of most hunters.

Looking back on the 2014 season, the overall lesson might be summarized as this: we should never be too sure of things, and we should always be on the alert for changes of any kind.

For example, on a property in Crawford County, Pennsylvania, where I’ve been running trail cameras for four seasons, I noticed that a deer trail at a narrow stream crossing—a trail that had been used extensively for the previous three years, at least–appeared to have been abandoned. The new crossing, already well worn, was about 15 yards upstream. I set a trail cam by it. The first time I checked that trail cam three days later, it had photographed a few bald deer. But in the following couple of weeks not another deer appeared.

I scouted and found that the deer did not revert back to their original crossing. Instead they were crossing farther up the gully, but I could not find a well-defined crossing at least until the property border.

I do not know for certain why those changes happened. My guess is that changes in travel patterns were related to whatever deer were eating. The woodlot where my trail cams were set had a good acorn crop this year. Crop fields in the surrounding area might have been attracting deer.

Also, differences in timing of the first rut peak around the Northeast Region have been demonstrated since we began these rut reports. This was to be expected, and was confirmed by reports around the region. Differences in timing of the first rut peak can be significant even within relatively small areas; this became apparent on trail cams I used in four northwest Pennsylvania quadrant counties. Trail cameras set in areas just 35 miles apart showed rut peak indications that differed by a few days. Then comments indicated the same thing was happening elsewhere.

Comments have been great since these rut reports began. This year we have had more comments than before, all providing valuable information. Realizing all of the above would not have been possible if we did not have so many excellent comments.

As we wind down these rut reports I want to say thanks to all readers, and especially to those who commented. I will still be able to enjoy plenty more deer hunting before the seasons end. And I will enjoy hunting for some specific bucks–the photo above is of me in the spot where the two bucks at top were photographed. Over the past few years, hunting for specific bucks has not improved my buck bag, but it has provided an interesting and exciting element to my deer hunting.

Good hunting and be safe.