Photograph by Bobby Vellucci. Not shy, this backyard bachelor group posed for an iPhone photo. Deer season is officially open... 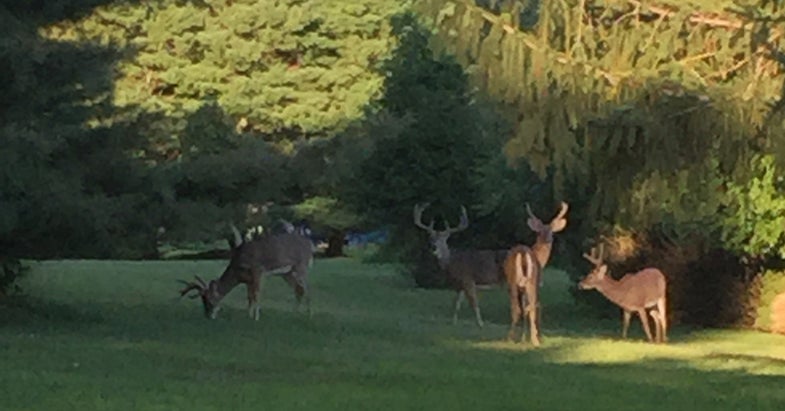 Photograph by Bobby Vellucci. Not shy, this backyard bachelor group posed for an iPhone photo.

Deer season is officially open in the Northeast. Delaware kicked it off with a Tuesday archery opener. Maryland bowhunters start next Friday, September 11, and in two weeks zones will open up in Connecticut, Rhode Island, New Hampshire, New Jersey, and Pennsylvania.

By all accounts, the deer are locked into their typical summer patterns. Hunters reported a slowdown in trail-camera photos this week, as a short heat wave moved through the region. Yet average late-summer temperatures across the Northeast are 2 degrees below normal this year—making for active deer and good movement.

“It’s definitely clear where the bucks hang out, and where the does hang out,” Vellucci said. “Figuring out which spot is which is the biggest part of our early season.”

Last week, while checking spots from the road, he snapped the above photo, and that 120-class suburban shooter is on his opening-day hit list.

“They’re using that mowed yard almost like a hayfield,” he said. “It’s only a couple hundred yards from where they’re bedding and they’re in there nearly every night. It’s a classic summer pattern, but there’s only a short window to capitalize on it.”