The Rut Is Breaking Out (Almost) All Over 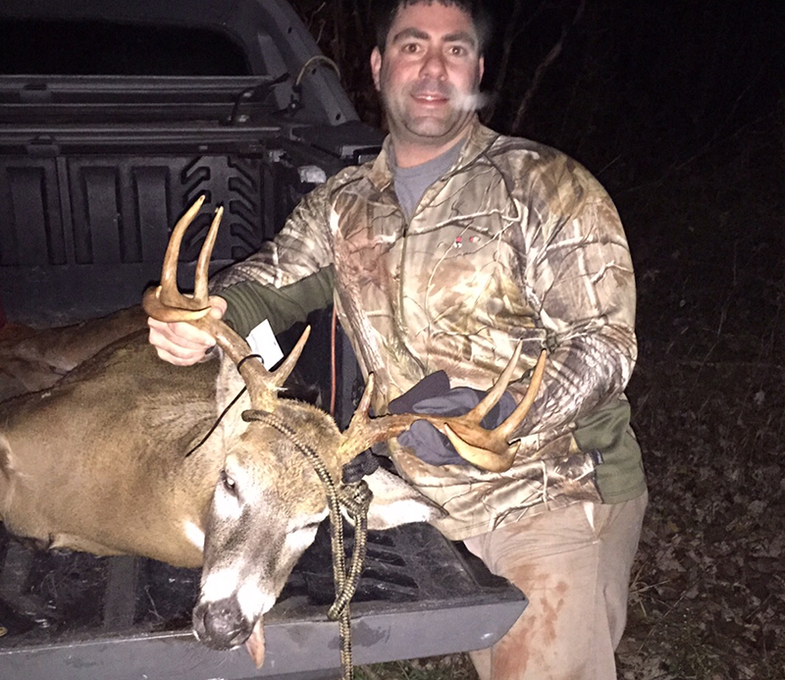 Christopher R. Smith, hunting central New York, scored on the excellent buck shown here last Sunday. He was hunting at the base of a ridge near the edge of a swamp, and had seen several fresh scrapes over the previous two days. After seeing a small forkhorn at about 3:00 p.m., he figured there was a good chance larger bucks would be moving regardless of stiff wind.

“Around 4:25 I heard some limbs breaking. I looked up and I saw this buck start tearing up a sapling,” Smith reported. “I grunted at him a couple times, but he seemed pretty set on destroying that tree.”

The buck began moving, rubbing several other trees along the way to the edge of the swamp and the hardwoods, and paused there. That was close enough. The shot looked good. Smith waited a while before looking for the buck.

“After getting down I finally found some blood, and then my trophy 70-80 yards away,” Smith wrote. “He was definitely one of my target bucks and the biggest buck I have shot with a bow to date. The rut seems to be heating up for sure as he had that distinctive musk of a rutting buck.”

Right on schedule, we are hearing deer hunting success stories.

Mike Stimmell, whose Pennsylvania big-woods success story was related in the previous report, watched a nice buck chase a doe across the road while on his way to work Tuesday morning. Driving very slowly, he watched the buck and doe cross the road again, in the opposite direction. “Pretty awesome to see,” Stimmell said.

Such a scene will be an increasingly common sight over the next several days. I doubt if the rut has reached the peak anywhere in the region quite yet. But soon, very soon, the rut will start to peak, piquing the excitement of deer hunters who are lucky enough to get a peek at a buck hot on the tail of a doe.

But as we have seen in the past, things are not the same everywhere. Rob Rogan, hunting in Connecticut, did not see any buck movement last weekend. He guessed 20-plus mph wind combined with higher than expected temperatures was the cause.

Jon Whitbred checked his trail cams in central Pennsylvania yesterday, reporting that most of the better bucks were moving at night. Does and two small bucks were photographed during daylight. He has noticed an increase in rubs and scrapes.

Reading through the more recent comments we see how the rut situation varies just within our Northeast Region. Andrew W, in Massachusetts, has seen lots of new scrapes and several rubs, but no daytime buck movement. Likewise, rustyinmaine wrote bucks moving only at night. In southwest Pennsylvania, aftown took a nice 8-point that was chasing a doe. After dropping that buck, a smaller 8-point he had grunted in earlier took up the chase of the doe while a forkhorn stood by the downed buck. In New Jersey, steve182 had bucks on trail cam during the day. Deer movement seemed to slow down in central Pennsylvania, commented dirtnapoutdoors. Does and fawns were on trail cam during daylight, but no big bucks yet, according to Northeastsportsman from west-central Vermont.

We are all getting an education by reading comments from around the region, probably changing some notions while supporting others. The more comments we get, the more we can learn.

Steelcityhunter, you wrote that you will be hunting in my neck of the woods Thursday and Friday. Let us know how you make out. Things have been happening here.

And SigShooter78, who commented on the last blog post about what he was seeing while actually sitting in a tree stand: Thank you. We can’t get a more up-to-date rut report than one that’s sent directly from the deer woods!