Johnny Browns with his 160-inch New Hampshire buck. Last week, we looked at how to pattern bucks in the big... 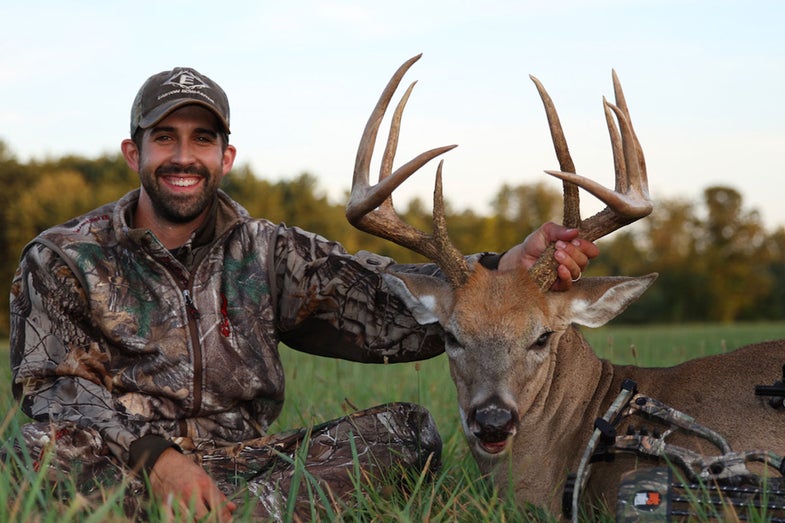 Last week, we looked at how to pattern bucks in the big woods with New Hampshire hunter Brett Joy. This week, we have another story from New Hampshire, but it involves a different kind of habitat altogether: the suburbs.

Johnny Browns, a New Hampshire native who hosts a local outdoor television show, stumbled on a deer he named “Brow Tine Freak,” or BTF, in early May while turkey hunting. Walking into a 400-acre woodlot late in the morning to pattern birds, he busted three bucks. “One of them had all this abnormal growth for May,” he said.

Johnny set about an “extremely low impact” scout, knowing that the area had a lot of other hunters. While BTF wasn’t living right among houses, he was on the edge of the suburbs in southern New Hampshire, so Johnny set cameras where he expected the deer to cross paths with people: open fields, tractor trails, established paths, well-worn crossings. “Humans, we own the fields, but the deer own the woods, so I was careful not to go into his domain,” Johnny said.

Johnny set out more than 20 cameras over a four-mile spread, and in July when the pictures started rolling in he couldn’t believe his eyes. The buck was not only huge by New England standards, but he was also living in a tiny core area. “He had 20 acres of corn right there, and he was bedded so close he didn’t have to travel far to get it,” Johnny said. “Later, there were good acorns and apples nearby, too. He never had to leave that little patch of woodlot.”

Then three weeks before the season, BTF disappeared. It’s impossible to know what happened, but it’s likely that guys started getting in the woods, hanging camera, and stands in anticipation of opening day. “I was a mess,” Johnny said, laughing.

Determined to play it slow, he wasn’t even sure he’d hunt opening day. Johnny went out to check cameras the evening before, and to his surprise, BTF was back. He caught him in a tiny brush lot not far from his first bedding site.

“There were only 12 pictures on the camera, so I thought they were all of me checking it,” Johnny said. “I almost didn’t look at them, then I started going through them and it was like getting punched in the gut. I knew he was probably 150 yards from where I was standing. I probably walked 50 or 60 yards right passed him.”

A daylight trail cam photo of BTF taken the day before the season opened.

On opening day morning, Johnny and his hunting partner Jeremy Ballantine checked all their cameras surrounding that woodlot. “I didn’t get any pictures of him leaving, so I knew he was in there,” he said. They pressed into the timber, and set up not far from the cornfield edge BTF had worked so hard earlier in the year.

As the sun started to set, the buck walked out of heavy cover. “I had him at 43 yards and almost shot, but I could feel the wind on my face coming from him to me, and I knew he would keep coming,” Johnny said. The deer came within 35 yards, 30 yards, 20 yards. “He was walking straight at us, and I knew he would step into this shooting lane that I ranged at 19 yards,” Johnny said. He drew, but the BTF didn’t move, and trees blocked the vitals. After a minute, the deer stepped forward, and Johnny made a crushing shot, piercing lung and liver.

“I had two really hard years of deer hunting before this season,” Johnny said. “I just couldn’t connect on the mature deer I was after, but in this case, it all came together.”

Much of that success, no doubt, is due to his low-pressure approach in a high-pressure environment. He hung tons of trail cameras, but only in spots where deer were already habituated to people.

For more about BTF, visit inpursuit365.com or on Facebook at facebook.com/InPursuit365.