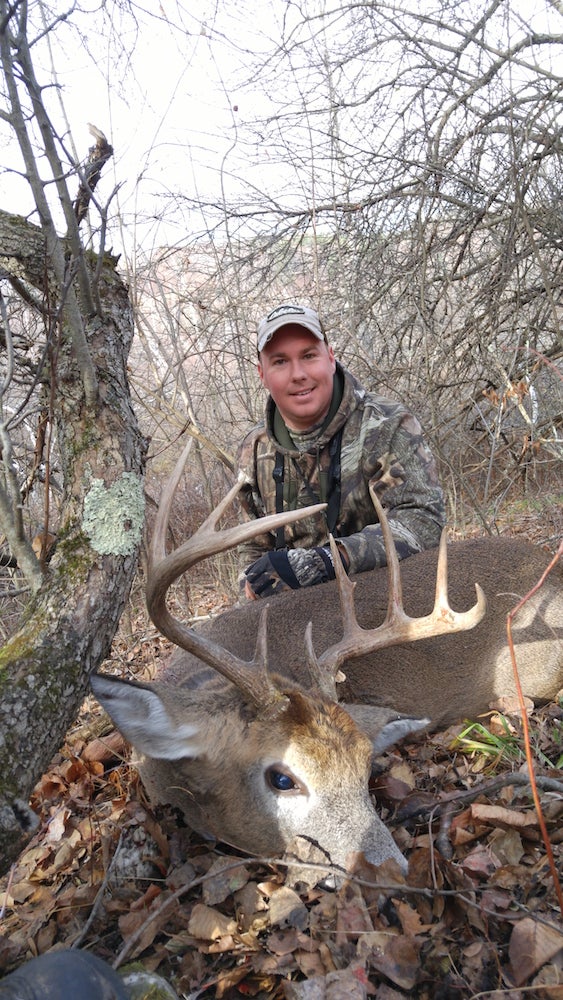 Don’t believe the doubters. There’s still plenty of seeking and chasing in the northeast deer woods. Reports from Friday through today in half a dozen states confirm hunters have seen a boost in rut activity with the recent cold weather. “In the past week we’ve seen a lot more action than we saw in the first two weeks of November,” said Dan Damours, who hunted the New York gun opener last weekend in Washington County. On Saturday, he watched two spikes running nose to ground. The second one stopped to make a fresh scrape. His uncle saw a hot doe being tailed by a pack of lusty little bucks, and on Sunday, Dan shot a great 120-class 10-point that was running with two does.

“We did a small push to fill my father’s doe tag, and I heard a few deer bump out of a thicket ahead of me,” Damours said. “About 60 seconds later, I heard him shoot, and the deer turned around and came back at me. I shot once, and the buck turned broadside, and I hit him again in the chest and he tumbled down the hill. We’ve had this farm in the family over 100 years, and its one of the best deer we’ve taken. It was a special day.”

Hunting in central New York, I didn’t have near that level of action. My friend and his wife saw more than 10 deer in the early morning, but no bucks, and around 8:30 a.m. a yearling half rack ambled past my stand, as you can see in the video below:

At the time I saw that deer, and after the fact when Mike and Chris Bard dragged it out of the woods, I couldn’t help but think to my conversations on Friday with Dan Bergeron, the deer project leader, for the state of New Hampshire:

“So far this year, at our biological check stations, we’re seeing phenomenal yearlings, yearlings with 6 or 7 points. Some are weighing-in at the high 130s and others are even approaching the 150s—in a state where the average yearling buck is 114 pounds,” Bergeron said. “The deer are in great shape, thanks to every available food source out there doing extremely well. The apple trees are so loaded that limbs are breaking off, and as a result, we’re noticing really, really good health indexes on all our harvested whitetail.”

Overall Activity Status: This resurgence of rut activity in the teeth of cold weather across the northeast is great news for hunters, but as Bestul pointed out last week, with gun seasons opened across the region, pressure is the No. 1 factor affecting deer movement right now. Gun season opened two weekends ago in Delaware, Vermont, and New Hampshire, and a few days later in Connecticut. New York opened Saturday and Ohio, Pennsylvania, and Massachusetts open on Monday. That’s a lot of hunters in the woods, and how they’re pushing deer trumps any rut or food patterns that might otherwise develop.

Fighting: As several other rut reporters have commented, I haven’t seen or heard reports of a knock-down, drag-out buck fight, but all the signs are there—from broken tines on bigger deer, to half-rack yearlings.

Rub Making: I’ve heard reports of fresh rubs in Maine, Massachusetts, and New York, but they’re not nearly as prevalent right now as scrapes, by most accounts.

Scraping: Several hunters watched bucks make scrapes live and in person this weekend. I wasn’t so lucky, but I did count seven fresh scrapes along a logging road on my walk out midday Saturday.

Chasing: As mentioned earlier, seeking and chasing is being reported nearly everywhere. Sure, the biggest deer are locking down does, but for many who saw little to zero rut action in the first two weeks of November, its feels like prime time right now. A friend of mine in central New York had the best sighting of the weekend, in my network at least. He watched a 130-inch 10-point run a hot doe in circles around a brush lot.

Estrous Signs: Most biologists in the Northeast will tell you peak breeding happens somewhere between Nov. 11 and Nov. 16—depending on how far south or north you are. By all those measures, the peak is behind us, but by all accounts there are still hot, un-bred does running around and bucks responding in kind. That said, I pulled my cameras on Thursday, Nov. 18, and picked up photos (from that morning) of does and fawns running together, including button bucks. My place was covered in does and fawns until early November, then bucks started showing up and they cleared out. Now they’re starting to tickle back in, telling me many are bred.

X-Factor: If you were going out this week or weekend, consider low-pressure spots that haven’t been trampled by the orange army. Then find the hot doe. In a week or so, it’ll all be about late season food sources, but right now I’d hunt like the rut is raging. It feels totally counterintuitive to me, this late, with a dusting of snow on the ground here on my home turf, but way too many hunters are reporting breeding activity for me to shift game plans just yet. If things are slow, start scouting late groceries like still-productive apple trees, sugar maple saplings, budding cedars, or hang out on food plots with cereal grains, brassicas, or sugar beats. When the gun hunters call it a season, and this last bit of rut rage subsides, the old late-season saw will ring true: find the food, find the deer.