Will Joaquin Wash Out Your Weekend Hunt? 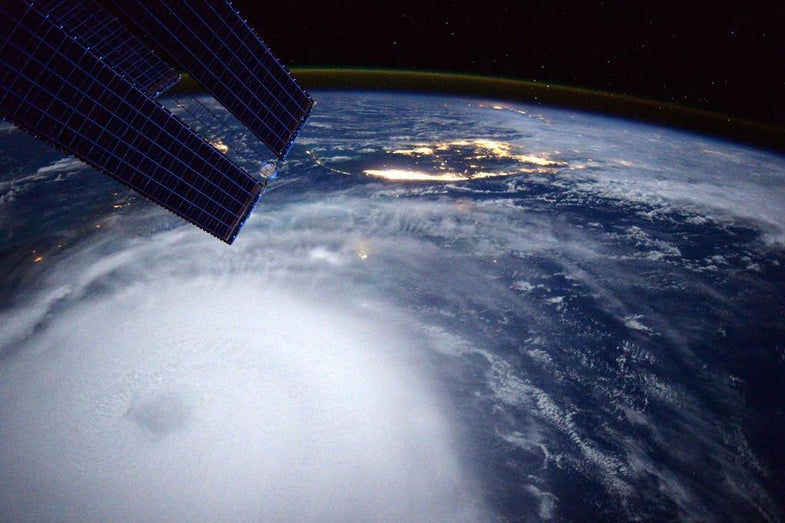 Photo of Hurricane Joaquin over the Bahamas via@StationCDRKelly/Twitter, aboard the International Space Station.

Everyone is talking about Hurricane Joaquin. Maryland declared a state of emergency. So did Virginia and New Jersey. In the Northeast, it looks like only the coast from the Chesapeake Bay region north to southern New England will see any effect, namely increased rainfall, wind, and a chance of flash flooding. There’s an unrelated front coming in from the west-northwest, too, that will bring weekend rain for Ohio, Pennsylvania, and New York, while a third high-pressure system coming in from the east will hit the New England and Mid-Atlantic coast with 20+ mile per hour wind. Except for the north end of the Northeast, it’s going to be windy and wet weekend.

So the question is: should you hunt?

Overall Activity Status: On Saturday, all of Pennsylvania and Vermont opens to bowhunters. New York State’s southern zone and Maine opened on Thursday. Only Massachusetts (of course) remains closed. By most reports, these late-state openers have lined up with whitetail coming off their summer pattern. Bachelor groups are slowly but surely coming apart. Deer hitting green fields with regularity are turning to other sources. From Maryland and Delaware up through New Jersey, Connecticut, and Massachusetts, hunters are reporting bumper hard mast, especially white oaks. In New York and points north, acorns seem to be about average. Apples are seemingly everywhere, too, but I’ve heard reports of dead zones in Pennsylvania. In my corner of the world, in New York’s Finger Lake region, the acorns look average at best, but every walk in the woods or drive down a dirt road results in bumping deer off apple trees.

Fighting: Velvet is off and hunters in Maryland, New Jersey, Connecticut, and New York have reported young bucks squaring off. The sparring is light and most bachelor groups are still together, but dwindling. This coming week and next that will change. No reports yet of knockdown, drag-out buck brawls.

Rub Making: Across the Northeast, rubs are happening. It’s definitely something to scout for.

Scraping: Many hunters are bumping into scrapes, but I’ve yet to hear of any big three-footers.

Estrous Signs: On my property, yearling bucks are still running with big does and fawns.

X-Factor: Food plus weather is the name of the game right now. Heavy acorns and apples are dispersing deer, but if you know a preferred oak stand or orchard, you’d be smart to hunt it on the front- and backsides of this weekend weather. When the wind gets jamming above 20, or blowing from the east, as it will do much of the weekend, deer tend to get squirrelly, either bedding down or traveling skittish. A light rain can make for a great deer hunt, but this weekend it won’t be light. For what it’s worth, I’m going duck hunting, with plans to get back in the stand on Tuesday or Wednesday.