Photograph: Bobby Vellucci with his New Jersey archery buck. With the record heat breaking and temperatures dropping in the walkup... 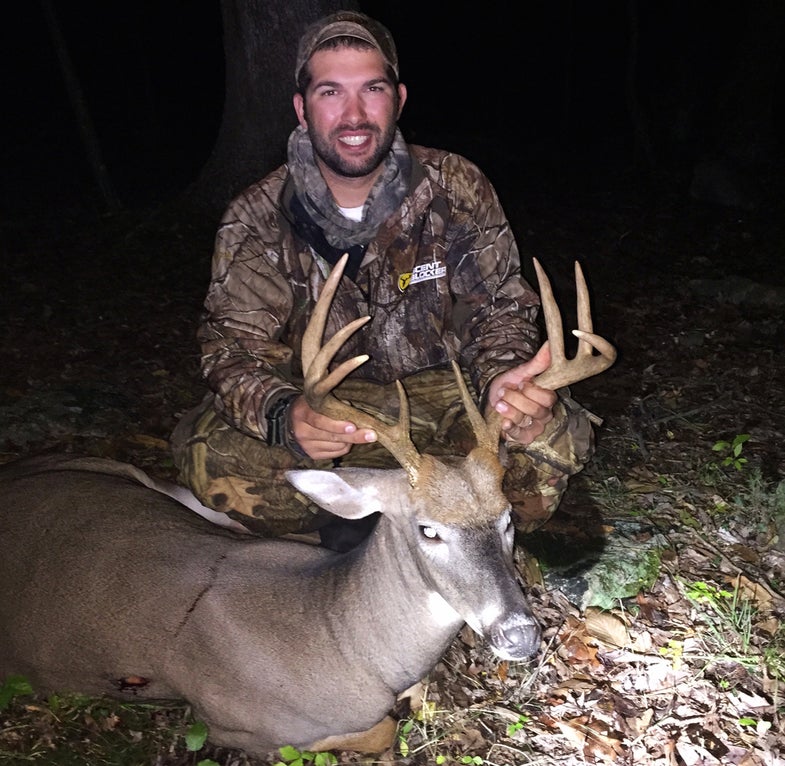 With the record heat breaking and temperatures dropping in the walkup to New Jersey’s archery opener last Saturday, I expected emails and text messages with deer photos all weekend—instead, the communication lines went silent.

“It was horrible,” said Bobby Vellucci, a good buddy of mine and a serious N.J. deer hunter. “The weather was just horrible.”

Saturday morning the temperature dropped, but, by several accounts, deer movement was at a minimum. Bobby connected on a doe at 7:30 a.m., earning his early-season archery buck tag, but half a dozen friends in his central New Jersey deer network weren’t so lucky. “The deer movement we did see was at odd times,” he said. “Two deer at noon. Another at 2 p.m.”

Typically in New Jersey, hunters will get their doe at first light on opening morning, and then start the harder work of finding and shooting a good buck. “This year even the does were super spooky,” Bobby said. “Maybe it was the east wind, or there were just so many guys in the woods, I don’t know. Deer I’ve been watching move like clockwork for weeks didn’t show up.”

By midday Saturday that squirrely east wind turned into a full-blown thunderstorm and many hunters called it a day. On Sunday, things started to return to normal September conditions. At 6:30 p.m. the nice eight-pointer pictured above walked out and Bobby took the 15-yard broadside shot. “He ran about 40 yards and died, then another buck that was with him ran over and made a small scrape,” he said.

In Connecticut, where I hunted the opener, on Tuesday, several hunters saw or connected on velvet bucks. If history tells me anything, by the end of this week most bucks in southern New England and points south will be hard horned. Acorns appear to be plentiful, too, but nothing like last year’s banner crop. Acorns dropped steadily in the white oak stand where I sat on Tuesday, but not so much that they pulled deer out of the uncut corn nearby.

Scouting around midday Tuesday, I didn’t see much buck sign, but that doesn’t mean it’s not there. One buddy found the start of a small scrap, maybe 16-inches in diameter, on his property, and another in Massachusetts found his first rub of the year. Last week, you guys were active in the comments section here, too. Northeastsportsman is seeing all velvet in Vermont and NH-HEADGEAR found two fresh scrapes in New Hampshire.

Wherever you’re hunting, good luck out there. Delaware, Maryland, New Jersey, Connecticut, New Hampshire, and Rhode Island are officially open. WMUs 2B, 5C and 5D in Pennsylvania open on Saturday.