It Pays to Fine-Tune Your Rut Tactics, Though Sometimes You Might Just Get Lucky

I’ll start this summary with a confession: I went into last Friday’s hunts holding my breath, because November 7 was... 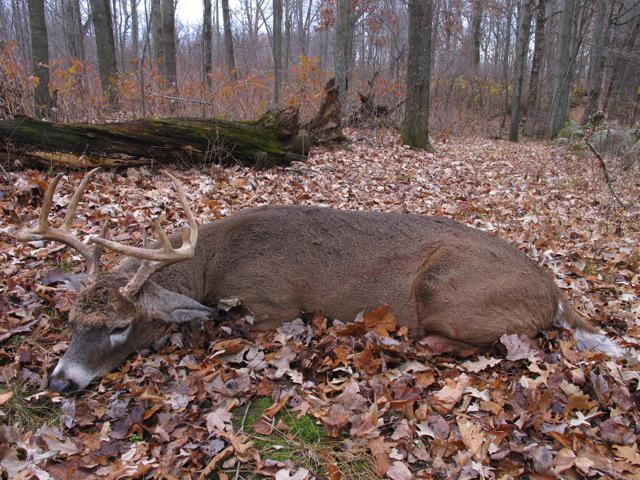 I’ll start this summary with a confession: I went into last Friday’s hunts holding my breath, because November 7 was my pick for 2014’s Best Day of the Rut. But I was smiling as the sun set that evening: I’d indeed had one of my best hunts of the season, with two nice bucks approaching within bow range. And later that evening, when my phone tree of whitetail nuts called in, I was pleased to hear I wasn’t the only one who’d enjoyed great action.

Still, none of those reports matches that of Hans Schabel, who sent this photo of a great Wisconsin 10-point he took that very day. “Not only did I get this buck on November 7,” Schabel tells us, “but I landed him after barely 10 minutes in the woods on the way to my stand. He is not a ‘monster,’ but where I hunt he is definitely not to be shunned. The polar vortex can come now. My buck’s tenderloins, enjoyed in front of our fireplace, will take all the bite out of it!” If any of you had some luck or good action last Friday, we’d love to hear from you, too.

But best day or not, successful hunting during the rut often boils down to adaptability: observing deer (or their sign), then adjusting your hunting plan and using the best tactics for the location and the situation.

Mid-South Rut Reporter Will Brantley demonstrated one of those go-to tactics last week in his native Kentucky: the all-day sit.

When bucks are moving big and often, no better tactic beats sitting in one stand from dark-to-dark. Brantley is wise enough not to sugarcoat this, however. It’s a tough grind, and bringing food, water and entertainment can help keep a hunter in the saddle. And Brantley’s advice on stand placement (on pinch points, corridors or secluded food sources) is spot-on.

Keeping your fingers on the pulse of the rut is important, and Great Plains reporter Steven Hill noted that road-kill deer counts is one way to determine how the rut is progressing.

The South Central region’s Brandon Ray pointed out another solid tactic: constantly checking trail cameras to see when bucks have transitioned from nocturnal to daytime movement.

Ray is also very successful in simply setting up on observation points and glassing for bucks. Glassing is one of the most highly effective techniques for monitoring deer, but most of us are simply unwilling to give up hunting time to simply observe. Our odds of actually killing the buck we’re after would soar if we’d set up on him after actually watching—rather than guessing at—how he travels in his home range.

South reporter Eric Bruce brought up an excellent setup for calling and rattling when he said that setting up in relatively open areas—which allow a hunter to spot a cruising buck—can be deadly for calling and rattling. In my experience, calling to a deer you can see is always a higher-odds proposition than simply blind calling. Most calling skeptics base their experience on blind calling (calling when no deer is visible), but I like nothing better than working a buck so I can see how he reacts to the grunts or rattling I try.

Finally, Great Plains reporter Hill points out (for the first time this fall, I believe) that hunters in his region are having success with decoying. This is one of the most underused tactics, in my opinion, by today’s hunters…and I’m guilty of ignoring it as well. Most decoys are so bulky, heavy and noisy that I just don’t like messing with them. It’s a big mistake.

So the rut is upon us. The heat map is positively glowing.

Everything points to stellar hunting in the days ahead, so take advantage!