A Great Time to Tag a Trophy

Your opportunity to see and score on a mature buck in Alabama, Mississippi, northwest Florida, or eastern Louisiana is at... 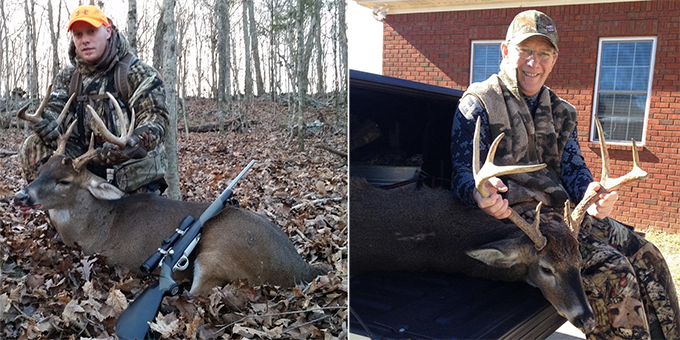 Your opportunity to see and score on a mature buck in Alabama, Mississippi, northwest Florida, or eastern Louisiana is at its peak. Mature bucks are fighting, chasing does, and moving in daylight, which all point to peak rut. The cold weather and absence of leaf cover only add to your chances.

“The bucks are chasing pretty good now in North Alabama,” reports Shane Dempsey, whose brother and father tagged some good bucks this past week. Brother Kyle (at left, above) had been hunting a ten-pointer for the last two years, and finally got a shot at it on January 9. Nothing will bring a mature buck out of hiding during daylight like a hot doe, and Kyle’s buck, which scored 133 inches, was following just such a female at 4 p.m. when Kyle dropped him. That’s Kyle at top left.

The following day, January 10, Stan Dempsey (at right) met up with a super eight-pointer that was following a doe. “That buck was running other little bucks off when my dad shot him,” Shane reported. “That deer’s rack was 18 inches wide and supported 9-inch G2s. The rest of the season should be prime.”

“Our bucks are wide-open rut,” reports Trevor. One of his hunters, Danny Shaw, killed a good buck this past week. “This buck was chasing a doe when he came by Danny,” Trevor notes. “His right main beam was broken from fighting.”

If you hunt in these regions and can spend more time in the woods this year, get out there now. It’s the best time of the year.