A Rut Hunt in Bayou Country

Deer activity is heating up or cooling down, depending on where you hunt in the South. I checked a trail... 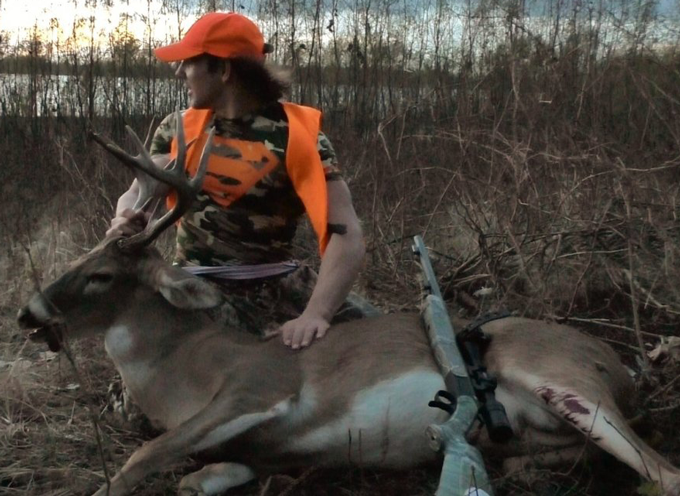 Deer activity is heating up or cooling down, depending on where you hunt in the South. I checked a trail camera on my Georgia hunting property prior to writing this report, and every single deer photo had been taken during the night. But deer are moving day and night in Alabama, Mississippi, and eastern Louisiana as the rut ramps up.

Bayou hunters know this and many are out in the woods hunting hard. One of those hunters is Josh Chauvin, who hunts public land along the Mississippi River several times per week. Last week, juggling family and social obligations, he struggled to squeeze in an afternoon hunt and was glad he did.

Chauvin was headed to St. Catherine Creek National Wildlife Refuge in Mississippi when he realized that he’d run out of primers for his CVA muzzleloader. He rummaged through his gear, found one unused primer, and headed for the stand.

Josh recalls the hunt: “With a southwest wind I headed for a spot where a doe had ducked my arrow at 20 yards while I was stalk hunting in a thunderstorm earlier in the year. After waiting for the late December rut to begin, I returned to see who would be chasing that doe. Fresh scrapes were everywhere, and my confidence grew.”

Josh jumped a good buck on the way to his stand, and then realized that he had lost one of his cameras. He backtracked trying to find it, gave up, and went on to his stand.

“It wasn’t until 3:45 p.m. that I was finally climbed in my tree, but the rattle horns were by the base of the tree,” Josh said. His grunt call was also on the ground. Then he heard a big deer coming.

“I heard the distinctive sound I knew all too well—a big animal walking by. I turned to the river bank and briefly glimpsed dark horns through the thicket. Usually, I only have a couple of chances at nice-racked bucks each season on the hard-to-hunt public lands, and quite possibly the only opportunity this year was just blown,” Josh said.

Chauvin got out his can call and turned it four times. “With my entire body shaking from the buck fever, it sounded like a deer with a shuddering speech impediment. After several agonizing minutes, the bushes in the thicket began to move.”

The buck came looking for the doe sound. Josh lined up and took the shot through a small opening in the brush. He later recovered the 185-pound buck on a sandy bank by the Mississippi River.

“When I stepped on the bank, I witnessed the prettiest sunset ever saw, featuring the biggest buck I’ve ever taken lying out on the open sandbar,” said Josh. “Usually when I find an animal, there are nonstop jumps and screams of joy. This time I just sat there a while in the fading light, completely speechless, soaking in one of those rare unforgettable hunting moments.”

If you hunt in Mississippi, Alabama, or eastern Louisiana, it’s an ideal time to get out there and possibly experience an unforgettable hunting moment of your own.