Brantley: How to End Your Deer Season

Rut Reporter Will Brantley of Murray, Kentucky, knows the region well. He spends 40 to 50 days each season in... 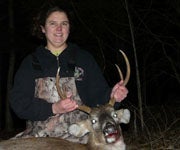 Rut Reporter Will Brantley of Murray, Kentucky, knows the region well. He spends 40 to 50 days each season in the Mid-South whitetail woods. Brantley shot his first deer at age 10 with a sidelock muzzleloader. States covered: KY, TN, WV, VA, NC.

My buddy Mike Pendley, who hunts in northern Kentucky, had one of the best seasons of his life–and he’s only carried a bow or gun himself a handful of times. He dedicates most of the year to make sure that his kids and his wife, Cheryl, have had their chances at a deer. This season was off to a great start when his son bagged his first buck in early October.

In the previous week, during Kentucky’s late muzzleloader season, Cheryl and her daughter Michaela spent some time hunting a ground blind over a food plot. Mike says reports on buck activity in his area have been mixed for a few weeks now. “One buddy who hunts a nearby farm said he saw an 8-pointer dogging a doe in an open field the other day,” he says. “But there’s a lot of hunting pressure here, and the only deer movement we’re seeing is right at dark. Most of my trail camera pictures have been at night, and most of the bucks seem to be grouped back up. Food is the key. They’re hitting corn feeders and food plots pretty hard. I had been getting pictures of one big 10-pointer on a pretty regular basis, too.”

Just before dark on Monday, Cheryl and Michaela watched as a 5-pointer stepped into the food plot, followed by another buck. The second deer was about ear-tip wide, and Mike says he’s been with the big 10-pointer in almost every trail camera photo. Sure enough, the 10-pointer stepped into the field moments later. Cheryl took aim and squeezed the trigger. But rather than a boom, she heard a click. She worked the bolt and again pulled the trigger. Click.

“It was just a bad cap,” Mike says, “but because she’d pulled the trigger twice, it was stuck, and she didn’t have a pocket knife or anything to pry it loose. The bucks fed around for a bit and then eased out of the field. When they got home, I pried the cap loose with my knife, put another one on, and the gun fired without a problem.”

Cheryl sat at that blind almost every evening for the rest of the week-long season without seeing a deer–much less the big buck. She and Mike went hunting Sunday afternoon, on the last day of season, and with 20 minutes before the end of shooting light, the ear-tip-wide buck, the one that had been hanging with the big 10-pointer, stepped into the field.

“We kept watching for the big one, but he didn’t step out,” Mike says. “Cheryl had just a few minutes to shoot, and I told her that it looked like she could shoot the smaller buck–or no buck at all this year. She sat there, quietly, and I knew she was thinking. With five minutes of legal light left, I heard her thumb the hammer back on the gun. She pulled the trigger, and the buck made it 40 yards before piling up. It wasn’t the big one she was after, but it was a nice deer, and a great way to end the season.”

When I called Mike to ask him a few questions for this post, he was preparing a backstrap from the buck for supper that evening. That–and Cheryl’s smile in the photo–is what a good deer season is all about.