Buck Movement Picking Up Down South

I’d be lying if I said I wasn’t a bit discouraged with the slow season I’ve had so far in... 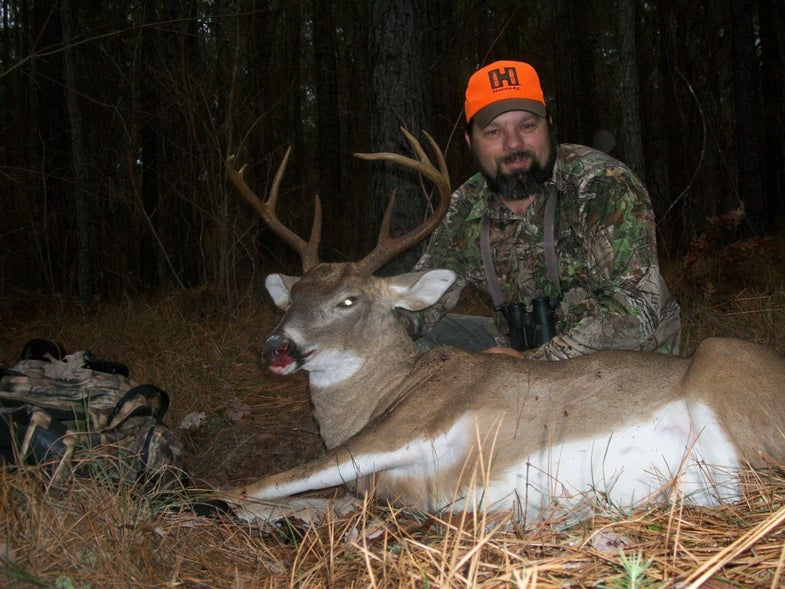 I’d be lying if I said I wasn’t a bit discouraged with the slow season I’ve had so far in South Carolina, but the game isn’t over just yet. Deer activity—mature bucks included—has picked up the last few days. I’ve noticed it, and so have several of my contacts.

One of my buddies in western South Carolina watched the same buck cruise by his stand twice last week, but couldn’t shoot because it was too dark. Meanwhile, Gene Wisnewski (pictured above) of Simpsonville, South Carolina, shot a good buck on November 30. He said the bucks were cruising and looking for does. “It’s been a sporadic rut,” Wisnewski said. “I was hunting the middle of a [clear-cut] where five trails came together. This buck came through right at sunset. I think bucks are looking for those last few [estrus] does.”

Overall Activity Status: Daylight deer movement is still slow overall, but it seems to be gradually picking up. Does are regrouping. Bucks are still showing signs of wanting to breed. Seeing them in the daylight has been the challenge the past few weeks.

Rub Making: A few rubs are showing up in the area where I hunt, and numerous contacts, including Wisnewski, have been seeing new rubs recently as well. That’s a good sign.

Scraping: I’m not seeing any really fresh scrapes, but a handful of my contacts are. “Old scrapes are still cold,” Wisnewski said. “But new scrapes are opening up close to them.”

Chasing: I haven’t seen or heard any reports of chasing lately, but I expect some scattered reports to start rolling in soon as we near the secondary rut.

Estrous Signs: No signs of estrus does.

X-Factor: Cold weather. We need it bad. The weather was fairly warm last week, but that is changing now. The last couple days have cooled down, and I personally believe that is why we’ve seen the sudden—but slight—uptick in deer movement.