Bucks Are on the Move in Late-Rut States

Overall activity status: Deer are moving well in Alabama, Louisiana, and Mississippi, where the rut and continued cold weather are... 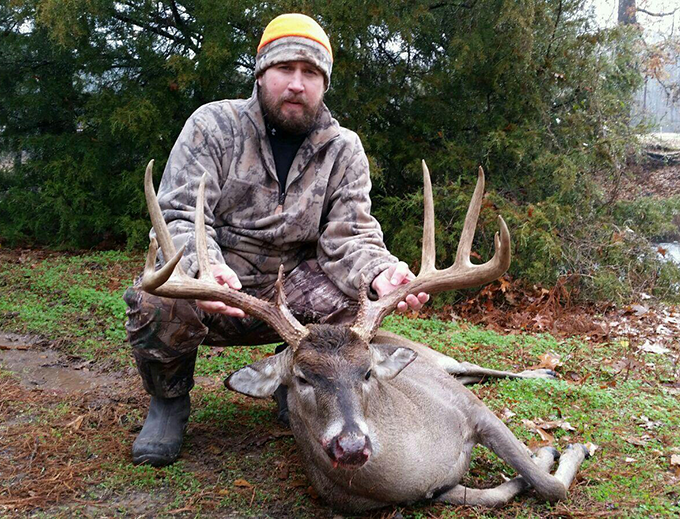 Overall activity status: Deer are moving well in Alabama, Louisiana, and Mississippi, where the rut and continued cold weather are keeping deer on the move. Bucks are cruising and visiting food plots and other areas where does are congregating, and some giant bucks are being killed.

Daytime movement: More mature bucks are moving during the day as they search for or tend does. Jason Russell capitalized on a giant 10-pointer doing just that in a food plot near Bossier City, Louisiana recently. Jason describes the hunt:
“My girlfriend and I were hunting in my stand this past Friday morning. About 8:00 a.m. a doe stepped out in my planted shooting lane. She put her head down and started eating, and within seconds this guy stepped out right behind her. My girlfriend Kate whispered ‘buck.’ He was not chasing the doe, just tending her. When he stepped out he was looking right at my stand. He turned his head back towards the doe and I pulled the trigger. He ran about 30-40 yards.” The wide-racked bayou buck scored 162 inches and the rack is 24 inches wide.

Fighting: With the rut so close in many regions, expect eager bucks to begin battling for does.

Rub making: Bucks are actively rubbing in pre-rut and rut areas. Many bucks being killed have tree shavings on their horns from rubbing saplings.

Scrape making: Pre-rut areas in Mississippi, Alabama, eastern Louisiana, and northwestern Florida will see a definite increase in scrapes as bucks advertise their presence and readiness to breed.

Estrous sign: Western Mississippi and eastern Louisiana’s does are close to estrous and many have already cycled. Mature bucks being seen in these and other areas indicate does being in heat.

X Factor: Some good bucks are making appearances at food plots like Russell’s buck. When does are in estrus or close, the big boys check such areas for doe activity.