Bucks Are Showing Up in Shooting Light

Overall activity status: Whitetails across the south are moving more as pre-rut conditions begin in Arkansas, Georgia, and South Carolina.... 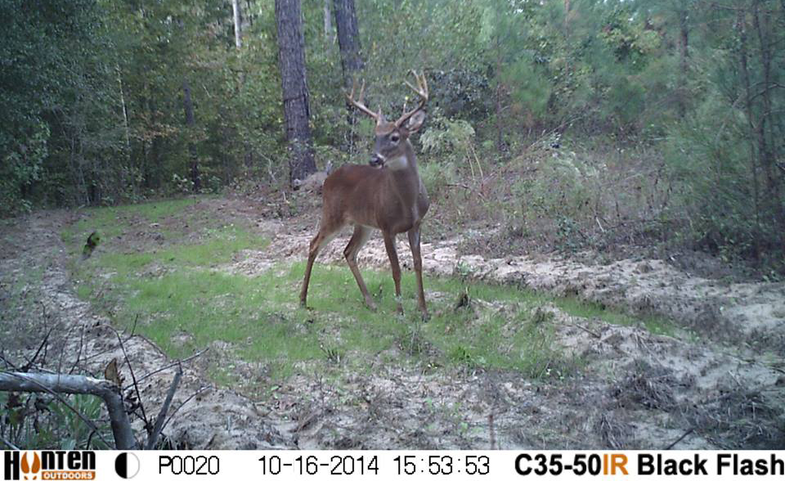 Overall activity status: Whitetails across the south are moving more as pre-rut conditions begin in Arkansas, Georgia, and South Carolina. There were some reports of slowing action due to the full moon and the “October lull,” but things seem to be picking up in most areas, especially daytime movement by bucks.

Rub making: This is one of the peak times for rubbing in many states, primarily in the pre-rut states of South Carolina, Arkansas, and Georgia. Estrous does are still a few weeks away, so bucks are working the trees hard.

Scrape making: Just like rubs, this is prime time for scrape making in many areas, but particularly Georgia, South Carolina, and Arkansas. The ten-point buck that Keith Black killed (mentioned below) had lots of scrape lines and rubs crossing his area.

Daytime movement: Louisiana is starting to heat up somewhat, at least in Allen Parish where Brandon Rider hunts. He let his 11-year old son hunt and he bagged a 120-pound four-pointer. “We are seeing pre-rut signs. It’s about a week from the better bucks getting caught on their feet,” said Rider.

Bruce Compton is “seeing more bucks in daylight hours with the rut kicking in around Bamberg, South Carolina” where he hunts on the Flatwoods Bow Club. Compton got the above daytime trail camera picture of a good buck this week.

“Buck activity seemed to really pick up over the weekend,” said south Georgia’s Bert Crosson. “The cooler weather coupled with the approaching new moon seems to have deer moving. We saw five bucks Saturday afternoon. I think testosterone levels are on the rise and this type of activity will continue to increase from this point on.”

Estrous signs: None being reported yet, even though some chasing seems to indicate that it is close.

X-Factor: If it’s pre-rut and you’re hunting an area with rubs and scrapes, a buck could pop out at any time. That’s what happened earlier this month in South Carolina. Several organizations in South Carolina organized a youth hunt, in which young hunters were paired with an adult mentor/hunter and given the chance to bag a deer.

Eric Eubanks of Williston, S.C. hunted out of a tower box stand with Keith Black of Orangeburg, S.C. After getting settled in the stand, which overlooked a food plot on a power line, both were surprised to see a nice buck come running out and stop. Keith got his gun up and nailed the ten-point 190-pound buck, above, where it stood.