Bucks Holding Onto Velvet, But Not Much Longer

Overall activity status: Though deer movement as a whole this summer has been pretty good, it’s slowed considerably over the... 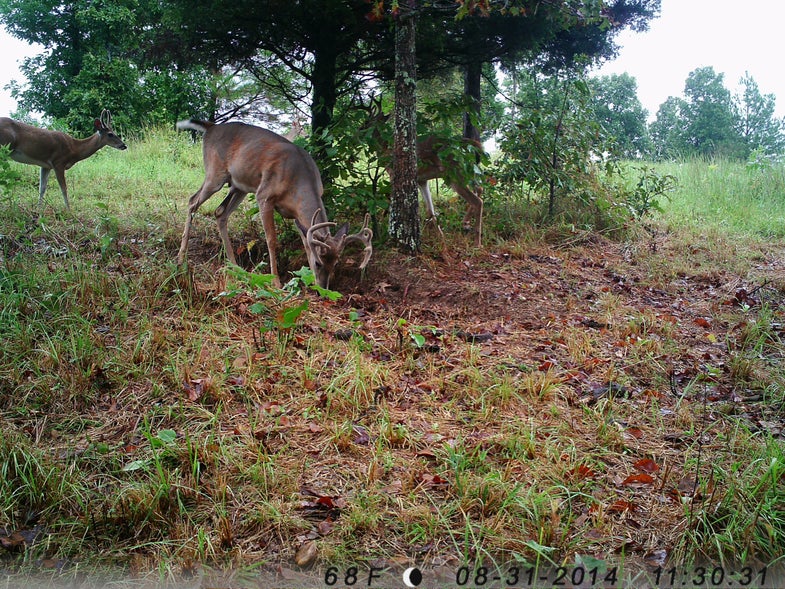 Overall activity status: Though deer movement as a whole this summer has been pretty good, it’s slowed considerably over the past three weeks. We’ve had a triple-digit heat index often as not lately, and it’s knocked most of the deer activity down to the after-dark hours.

Beyond that, the whitetail world is changing fast this time of year. Early reports indicate a good mast crop in the region, and a few acorns are already falling. Aside from the rut itself, few things shake up predictable deer patterns more than a heavy mast crop. And, although most bucks in the region are still holding on to their velvet (including the bachelor group in the trail cam photo above, captured the last day of August), a few are beginning to strip it away. The rest will be done within 10 days. When the velvet is lost, the clockwork patterns of a summertime bachelor buck usually go with it.

Fighting: I’ve captured some cool trail camera photos of bucks and does both posturing for dominance in my food plots this summer, but the real sparring won’t begin until the bucks have shed their velvet, and of course serious fighting is still a solid month and a half away.

Rub making: Nothing yet to report, but the earliest of early season rubs could appear at any time.

Scrape making: Nothing of real significance to report here either, but I did capture several photos of different bucks lightly working a licking branch (including the one in the photo here) over a bait site just off the edge of one of my food plots. There’s no scrape there yet – but I’d lay odds that there will be by the middle of October.

Daytime movement: As mentioned, daylight activity has slowed considerably over the past few weeks. Most of the movement in what would be legal shooting light has been during the cool early morning hours.

X Factor: Kentucky bow season opens Saturday, Sept. 6, and it’s timed perfectly with the first real cold front of the season. Temperatures are still supposed to climb into the 80s during the day, but that’s a 15-degree drop from the daytime highs we have right now. Given that, plus enough bachelor-group activity remaining to keep things interesting, I’m predicting some giants will be killed on opening day. Hopefully I get one of them myself.