Bucks on the Move Despite the Heat

For this post, I’ll be turning it over to my colleague and buddy Dave Hurteau, deputy editor for F&S. Dave... 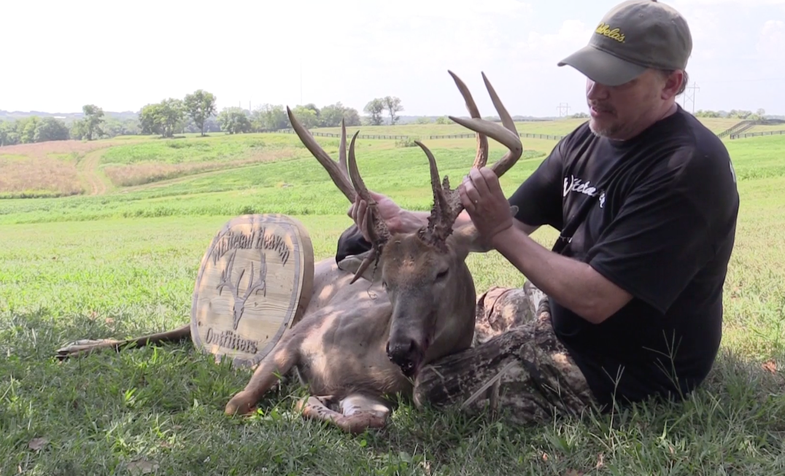 For this post, I’ll be turning it over to my colleague and buddy Dave Hurteau, deputy editor for F&S. Dave has been hunting a few hours east of me at Whitetail Heaven Outfitters, and they’ve been killing some giant bucks. Hurteau shot this gnarly non-typical a few nights ago. This morning—as I was working on this post, actually—he sent me photos of a 200-inch full-velvet giant that was hauled into camp by a Louisiana hunter last night. Details to come on that buck very soon. For now, enjoy the story of Dave’s first Kentucky buck. —WB

Since opening day of the Kentucky bow season on Saturday, I have been hunting with Whitetail Heaven Outfitters in Nicholasville, courtesy of Cabela’s. The post-and-beam lodge is just an hour or so south of Louisville, in the heart of horse country. From the lodge’s deck, it’s rail fences, rolling hills, and horse pastures for as far as you can see—not to mention some incredibly good whitetail habitat.

One of the farms within the outfit’s 25,000 acres of hunting land has about 100 deer per square mile, and most of the others have 40 or more. All hold some real slammers. Last night, one of the hunters shot at a 190-class 3-year-old, but his is arrow clipped some vegetation and sailed off harmlessly.

As I say in the video, on the first day, owner Tevis McCauley showed me pictures of a couple of cool, funky non-typicals living near the stand I’d be hunting. On the second night, around 7, this guy came through.

Every day so far has been in the 90s, but the deer are still moving—and on fairly predictable late-summer patterns. On my first night, I saw deer from the minute I got into stand around 4 pm straight through dark. It was all does and fawns at first, and then a bachelor group of decent bucks came in around 7 or 7:30, and then a couple small bucks later. Just about all of the 30 or so hunters in camp have been seeing decent deer movement, but the majority of buck activity, as you would guess, has been in the last hour and a half or so of light.

I’d say a little more than half of the bucks are still in velvet. Of the four that have come in—all of them great bucks, including a huge 8 with split brows—only mine was in hard-horn. We are supposed to get a little rain and some slightly cooler temps, starting today. But only slightly. The sits will continue to be hot and sweaty, for sure, but don’t let that keep you out of the woods. Good bucks are still moving, and this a great time to get on one. —DH