Cooler Temps, Hotter Bucks–and a Hint of What’s in Store

Overall activity status: The weather the past week, when afternoon temperatures were in the 80s, dampened deer movement. However, this... 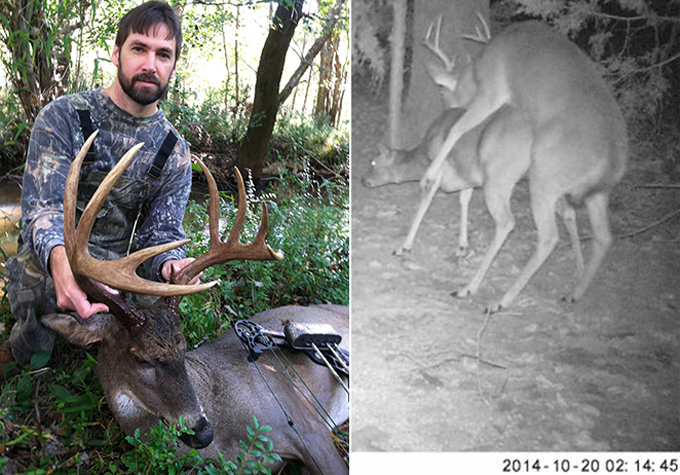 Overall activity status: The weather the past week, when afternoon temperatures were in the 80s, dampened deer movement. However, this weekend should be the most favorable far, because a cold front has arrived and dropped morning temperatures into the 40s in much of the region. Cooler weather and an approaching rut all spells much increased movement.

We are right on the border of the pre-rut evolving into the early rut in South Carolina, Arkansas, Georgia and portions of Louisiana. Buck activity should in stepping up in these areas.

Fighting: Fighting should be on the increase. Jeff Atkinson, who hunts a club in southwest Georgia, said four bucks showed up–including a 150-class ten-pointer—when another club member rattled. Considering the temperament of bucks now, rattling may draw bucks in many areas.

Rub making: Rubbing is still in high gear, although it may be slowing somewhat with some bucks beginning to follow and hassle the does. Scott Perrodin, who hunts in Louisiana, said, “The rut is in its first stages here. Rubs and scrapes are everywhere. Some bucks with swollen necks being killed. Biggest one was a young 10 pointer on our property. My guess is that in the next two weeks we will be at peak. “

Scrape making: Scraping is rampant across the South. Most feeding and travel areas will have numerous pawed-out places under overhanging branches. John Kerr hunts in middle Georgia and has observed many scrapes. “In Crawford County, the scrapes are showing up full force, but movement has been down,” he said. “This past weekend was very slow (probably due to temps in the high 80s). I would imagine this weekend should be great pre-rut conditions with the cold front coming in.

“[On] my farm in southwest Georgia, Baker County, the deer are almost still in summer patterns. They’ve changed food sources a bit as the live oak [acorns] on our property are falling heavy. The fawns I saw weekend before last still had their spots. The next three weeks should really get rocking in middle Georgia.”

Daytime movement: Cooler temperatures and pre-rut activity are stimulating daytime movement. Mike Lee of Athens, Georgia caught the stud of a buck shown above checking scrapes mid-morning last Saturday. Lee was hunting a well-used trail bordering a swamp and a kudzu patch on his Clarke County property when the buck showed up.

“I got on stand at 7 a.m. with temps around 42 degrees, clear, and calm. I hadn’t seen or heard anything until 8:40, when I looked to my left and caught movement in the privet hedge coming up the trail,” Lee recalls. With bow drawn, the hunter played a tense waiting game waiting for a clear shot while the buck was within 15 yards but shielded by thick privet branches.

“He walked back about ten yards and angled toward from behind an oak tree with nothing but his head sticking out. I couldn’t let down without him seeing me so I held in hopes he would move out quickly. In about ten seconds, he stepped out from behind the tree and began walking away pretty quickly so I grunted; but he never slowed. Knowing he wouldn’t stop, I got on the shoulder and squeezed. I saw a flash of the arrow go out to him and heard the whop, from which he turned and hopped off in the direction he came from with his tail tucked.”

Not confident of his shot, Lee left and returned an hour later and took up the trail. The trail snaked through the brush, over two freshly made scrapes and into the creek. “As I prepared an arrow, the wind shifted right toward me and instantly I could smell him nearby. I eased through to the water’s edge, looked right, then left, and saw him laying downstream about twenty yards. The deer green-scored 144 and is a clean, beautiful ten-point with 21-inch main beams, a 15-inch inside spread, and the longest tine at 11 inches. I still have the rut coming and another tag!”

Estrous signs: It’s very possible that some does are already coming into estrus, but the bulk of them in the rut states are still a few weeks away. Marshall Alexander of Arkansas sent in the trail cam photo here of a buck mounting a doe. “I’ve seen lone bucks looking for doe,” he said. “But that might have just been a fluke.”

X-Factor: Several hunt accounts point toward bucks checking scrapes. But before you sit on the edge of a field or in the open hardwoods, consider Lee’s hunt story. Even though the buck was checking scrapes, he was still in the thick cover. Mature bucks don’t expose themselves unnecessarily, and even then on rare occasions, such as when chasing estrous does). Most big bucks will still be in thick cover, so concentrate on hunting those areas.