After a rainy Friday and windy Saturday morning, beautiful cool weather migrated across the South. Walks to the stand and... 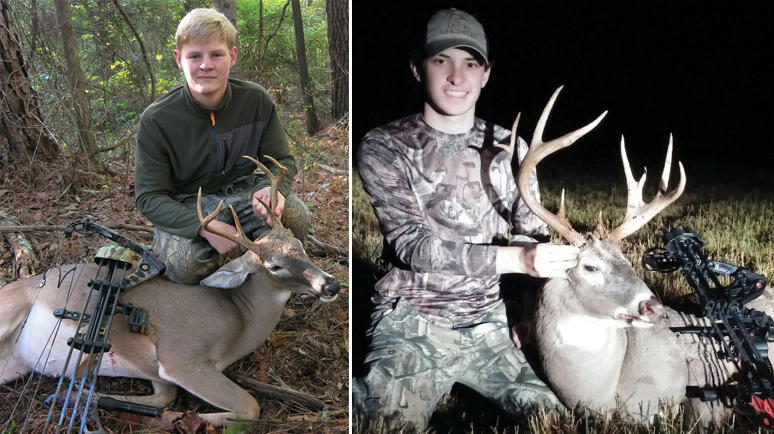 After a rainy Friday and windy Saturday morning, beautiful cool weather migrated across the South. Walks to the stand and climbing trees can now be done without sweating, and the cooler temperatures, which have been in the 40s in the mornings for the first time this season, have also invigorated the deer.

Rubs and scrapes are increasing and there have been some reports of bucks becoming very interested in the does, although the girls are still weeks away from coming into estrus. Even though the chasing phase is not here yet, eager bucks may be lured into range with calls and lures. A grunt call and a bleating can call should be must-have gear in your pack from now on.

After marrying off my daughter Saturday, I slipped off to the woods with my two sons the next morning for some cool-weather bowhunting. My 15-year old son, in the photo at left, was thrilled to arrow a seven-point buck that was feeding with another buck. I watched that other one, a small eight-pointer, make a scrape.

Dillon Dobbs, another 15-year old boy from Georgia, bagged a very nice buck this past weekend in Clayton County. He was hunting a swamp bottom near white oaks, when two bucks came in. One veered off, while the nine pointer began feeding on acorns. Dillon, above right, took a 20-yard shot and recovered the buck about 70 yards away.

If there’s a lush food plot or an acorn-raining oak tree where you hunt, that is where you need to be now. Most hunters who have tagged good bucks are finding rut sign such as rubs and scrapes around food sources.

Serious rutting activity will be occurring soon in South Carolina, Georgia, Arkansas, and portions of Florida and Louisiana. Mississippi’s season opened recently, but deer there are still many weeks away from their rut.