Daylight Deer Sightings On the Rise

Overall activity status: Following a rainstorm early this week, cooler temperatures have arrived across much of the South, spurring an... 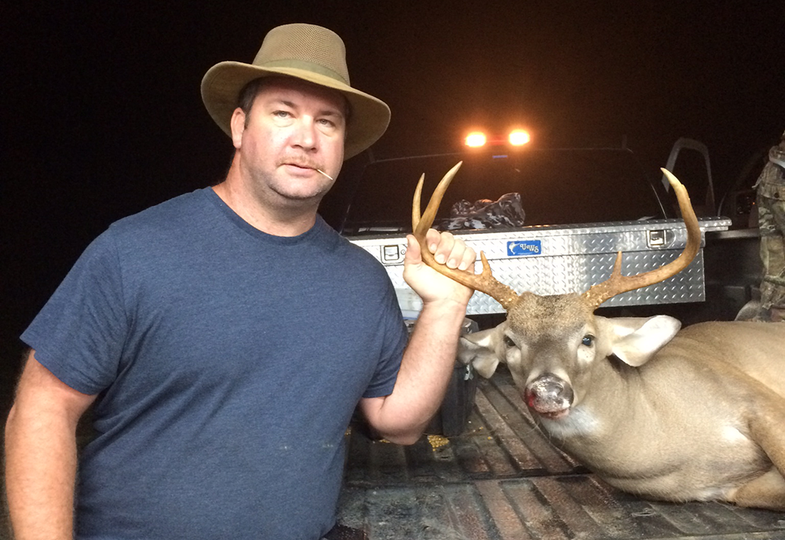 Overall activity status: Following a rainstorm early this week, cooler temperatures have arrived across much of the South, spurring an increase in activity. That along with the rut getting closer in Arkansas, South Carolina, and Georgia has contributed to more deer sightings. Alabama opened their archery season on October 15, so all seven southeastern states now have deer seasons open.

Fighting: No reports yet on serious fighting among mature bucks, but scraps between younger bucks is fairly common right now.

Rub making: Rubs are definitely on the increase, especially in the pre-rut states of Georgia, South Carolina, and Arkansas. Bucks are readying for the rut and rubbing on saplings throughout their range.

Scrape making: Scrapes are also becoming as common as rubs. I located half dozen scrapes along a creek bottom on Thursday (Oct. 16), and I have similar reports from other hunters.

Daytime movement: Blewer’s husband scored on a different buck—a 195-pound South Carolina seven-pointer (shown here). “The buck out was feeding during daylight,” Shanell said. “The weird thing is that a few minutes after he was shot, another buck came out, walked up, and smelled the dead one. Then he went in into the woods and came back out with another 6-point, who proceeded to do the same thing.” With cooler temperatures and pre-rut conditions close, look for more daytime traveling.

Estrous signs: None being reported yet.

X-Factor: We’ve reached a point in the season that some refer to as the October lull—that slow period after the summer feeding pattern and before good pre-rut activity kicks in. In the states approaching the pre-rut—South Carolina, Georgia, and Arkansas—bucks may be less visible and harder to pattern.

What’s a hunter to do? Well not everyone subscribes to this idea, and bucks still can be found and killed. Successful October hunters focus on hidden food sources like acorns and on locating active scrapes. Most activity may be at dawn and dusk, but it’s no time to quit till the rut.