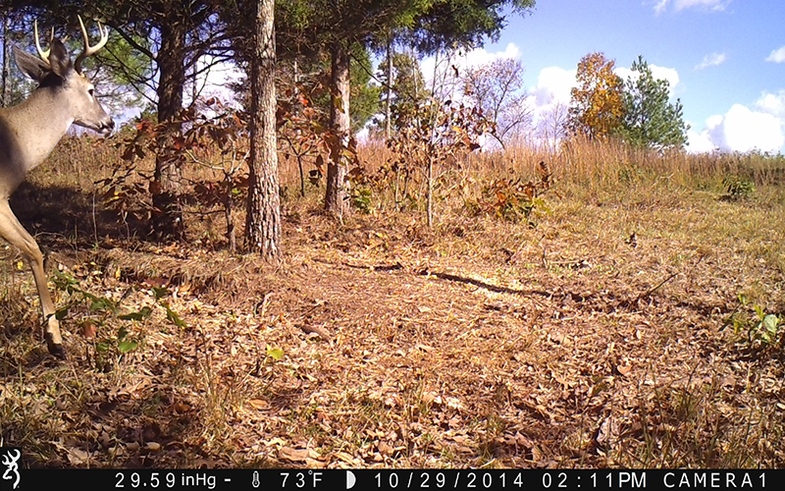 Overall activity status: Tuesday’s cold front flipped the switch–the past two days have seen a huge uptick in daylight buck activity. I hunted Thursday until about 10 a.m. and saw three little bucks on their feet and cruising. I pulled cards from three trail cameras before coming home, and each camera had captured numerous daylight buck photos over the past two days. Most of the bucks, predictably, were young, such as the one in the photo above, but the surge in activity is encouraging. The photo above was taken at 2 in the afternoon.

Fighting: Fights are of the vicious sort now. One of my trail cameras captured a dozen or more shots of two 2 ½-year-old brawlers locked up on the edge of one of my food plots last night. I’ll definitely take rattling antlers to the stand with me.

Scrape making: I’ve mentioned it this year already, but the number of scrapes I’m finding is so impressive that it bears repeating. I hung a new camera on a hardwood ridge next to Michelle’s favorite stand last Saturday afternoon. There were no scrapes within sight, so I made one of my own. I slipped in there to check that camera this morning, and walked past four or five new scrapes, one of which was still wet from a recent visit.

Chasing: I haven’t seen anything yet or heard of any reports, but I know there is some chasing going on. I got a picture of a buck crossing a turnip plot at 9 a.m. Wednesday morning with his tongue hanging out. He’d either been running from or after something. My guess is the latter.

Daytime movement: Does and fawns are still hitting food sources regularly as they have been since August. Bucks are showing up in those places right now, too, but they’re not doing much eating. They’re there for the ladies. The doe groups should remain predictable for the next few days, especially during spurts of cool weather. Where they’re feeding is precisely where you should be spending your time, particularly during evening hunts.

Estrous signs: I did get a few shots of lone fawns yesterday. Some does will be coming into heat soon.

X Factor: The hunting weather is pleasant today, but we’re supposed to have our coldest weather of the season this weekend. If anything, that will add gasoline to the fire that’s already lit. For a bowhunter, there is no better time to be in the stand than right now. A good buck could appear at any second, but your best chance is still during the early morning and late-evening hours, when the does are on their feet.