Michelle and I had our first child back in June (and I changed the first diaper of my life later... 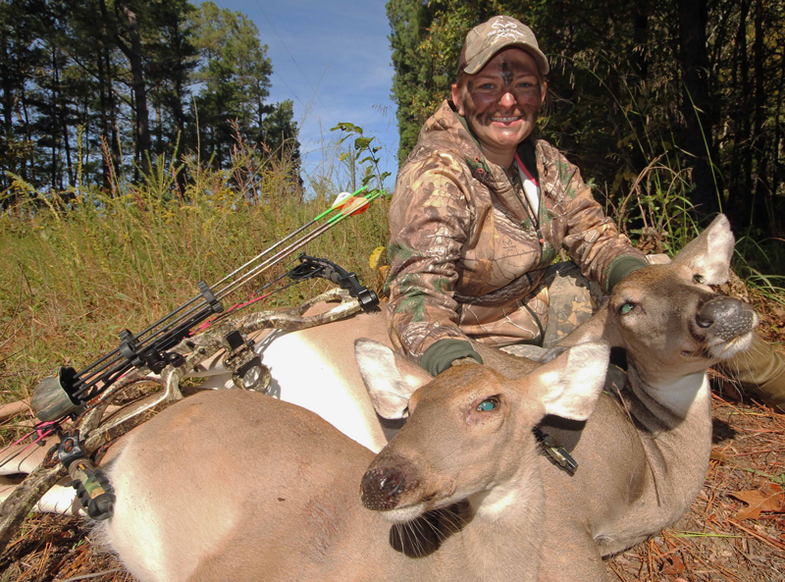 Michelle and I had our first child back in June (and I changed the first diaper of my life later that same day). Now that autumn is here, my weekday routine consists of taking Anse to daycare, sitting down at the desk to work on deadlines that have passed, and then slipping off to the stand for a couple hours in the evening. Michelle’s a teacher and out the door for work before daylight.

But she’s on fall break this week, and when she saw the forecast for a northwest wind yesterday morning, she allowed that she’d be in her favorite ladder stand before daylight. This is the same stand where she killed a big 10-pointer last gun season, her best buck ever. It’s on an old-growth hardwood ridge that borders a thick cutover. It’s covered with white oaks, and we’ve only hunted it once this season. A big buck would’ve been nice, but Michelle’s main mission for the morning was to shoot a doe, since our venison supply from last season had dwindled down to a few packages of burger. Given the cool morning forecast, the abundant mast crop, and this week’s full moon, I figured Michelle’s chances of some mid-morning action would be good.

But she was almost out of arrows by mid-morning. She texted me at 7:11 yesterday—before I’d even gotten out of bed if I’m being honest—to tell me she’d shot a doe. She stayed in the stand, and by 8:30, I got another text. She’d shot another one, a yearling this time. “Heard this one crash,” she said. “Don’t worry. I only have 1 arrow left.”

I dropped Anse off at daycare and met Michelle at the farm to help look for her deer. Both were hit squarely through the lungs, and neither made it more than 100 yards. The blood trails were easy to follow, and Mama was happy.

Early to mid-October is my favorite part of the season to fill antlerless tags. Though the afternoons are still warm, the morning and evening weather is cool enough that getting a deer butchered and on ice isn’t a mad scramble against the heat. Buck sign is increasing by the day throughout the Mid-South, but we’re still three weeks away, at least, from the Big Dance. Shooting does right now is a good way to both stay in tune and stock the freezer with minimal disturbance to your rut hunting later on. Michelle probably won’t touch her ladder stand again until Halloween or later. By then, I expect that ridge to be torn up with buck sign.

A heavy mast crop like we have right now can make patterning deer in the timber exceedingly difficult, but it does have its benefits if you like to eat venison. Thanks to the acorns, both of Michelle’s deer were already building thick layers of fat for the winter.