Overall Activity Status: The deer woods change fast this time of year. Thousands of acres of standing corn have been... 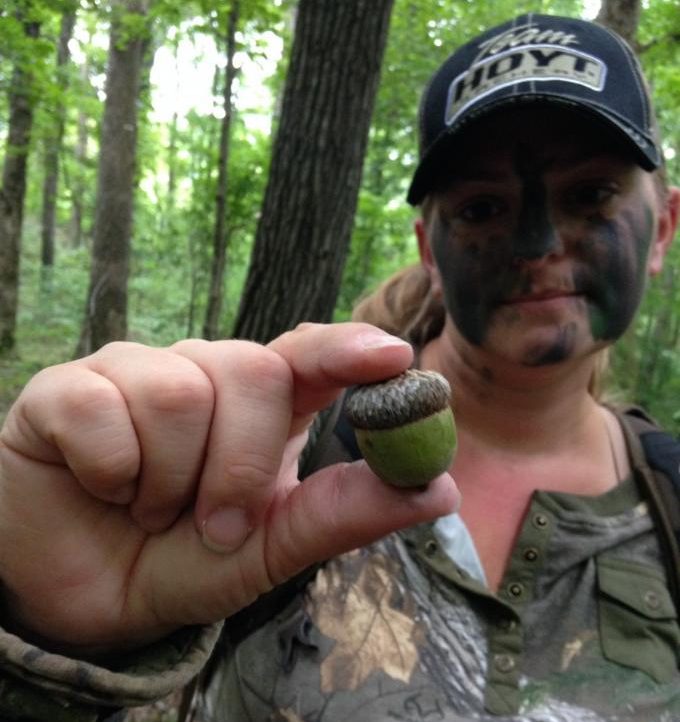 Overall Activity Status: The deer woods change fast this time of year. Thousands of acres of standing corn have been picked over the past week, and soybean fields are beginning to yellow. If my time in the woods during the past few days is any indication, it appears that the predictions for a heavy mast crop are holding true. Last week, Chris Ryan, who works for the West Virginia Division of Natural Resources, told me the red oak crop seemed especially heavy in his area this year. That seems true around here in western Kentucky as well, as we found numerous big red oak acorns on the ground over the weekend, including the one Michelle is holding in the photo. Red oaks aren’t as favored by whitetails as white oaks, of course, but we found several of the smaller, sweeter white oak acorns on the ground as well.

These changing food sources and shorter days of course mean the predictable patterns of late summer are coming to an end.

Most bucks in the Mid-South have now shed their velvet (the one in the trail camera photo here looks to have shed the day of this photo, Sept. 10). Bachelor groups seem to be in the process of breaking up, too. I saw two lone bucks—one nice one, one spike—on Monday evening. Expect to see some gentle sparring about any time.

Rub making: While I’ve not personally seen any or heard of anyone else seeing any just yet, the first rubs of the season should be showing up any day.

Scrape making: Nothing to report.

Daytime movement: Despite all the fresh acorns in the woods, deer activity remains pretty good on the fields. I’ve spent the past several evenings hunting clover, winter wheat, and chicory food plots, and I’ve seen deer in them every time. This fall has been unseasonably cool so far, and the waning moon over the past week has seemed to put deer on their feet a little earlier in the day. I’ve seen excellent movement throughout the last hour of shooting light.

X Factor: The prevailing wind direction for this time of year is out of the south, and usually from the southwest. As a result, an overwhelming number of area bowhunters set their best early season stands for southerly winds.

But the repeated cold fronts of 2014 have thrown us a curveball. Day in and out, the prevailing winds for virtually the entire month of September—including the Kentucky archery season that’s been open for 11 days now—have been from the northeast. That’s of course the definition of wrong for a southwest wind stand. While I do think the cooler weather has spurred some excellent deer movement, many hunters, me included, have been forced to hang back and “play conservative” with our very best stand sites. From the looks of this week’s forecast, we won’t be getting a reprieve from the northeast wind any time soon. But the good news is, there are many “virgin” sets out there just waiting to be hunted. We’ll see what happens.