Food Is Now a Factor in Late-Rut Activity

Overall activity status: Despite the end of the rut and a region-wide warm-up, deer activity has been decent the past... 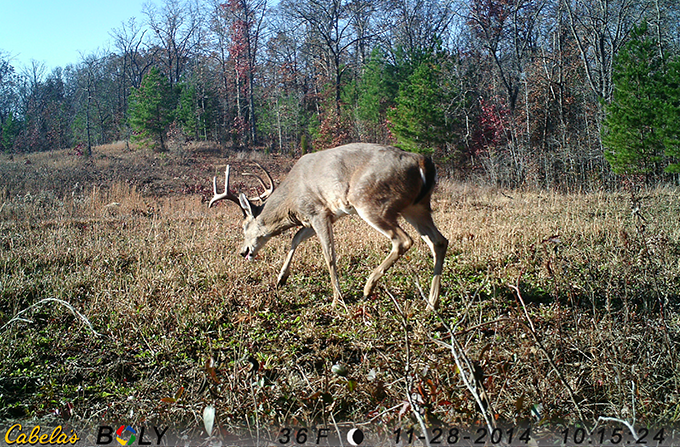 Overall activity status: Despite the end of the rut and a region-wide warm-up, deer activity has been decent the past few days (see my last report for details on Nate Smith’s Tennessee buck, taken on Thanksgiving Day). Over the long weekend, I pulled a card from a trail camera on my farm in Kentucky, and it was full of photos, including the one above of a nice buck patrolling a food plot at mid-morning last Friday.

Fighting: A different camera on my farm, set on the edge of a brassica plot, captured this photo of two young bucks fighting—or at least of one of them gouging the other in the ribs with a G2. The aggressor is a 2 ½-year-old 8-pointer that’s become a regular visitor to that plot since gun season closed. He’s going after a tiny spike buck, which I’m guessing will away from the 8-pointer going forward.

Rub making: I found a fresh rub line while checking my cameras over the weekend.

Scrape making: Nothing to report, although based on activity I suspect some scrapes are being freshened up once again.

Daytime movement: Activity seems to ebb and flow with favorable weather. My cameras were busy on the cold, high-pressure days, but not so on the warmer, windier days that have been filling the forecast lately. I’ve definitely noticed a spike in activity around food sources. Corn piles that had been mostly untouched during the rut (which happens every year) are picked clean within a day or two now; and my food plots, particularly those with winter wheat and brassicas, are full of tracks and droppings. Clover and chicory plantings have mostly gone dormant, but deer are still hitting them as well.

Estrous signs: Nothing to report, but I expect some secondary rut activity soon, as a few doe fawns should come into estrus.

X Factor: It’s time to consider some late-season hunting strategies, and that means pinpointing late-season food sources. Remaining mast, standing crops, waste grain, and bait sites are all productive places to hunt in the late season, especially when it’s cold. But in my experience, green stuff can be just as attractive right now. We had an unseasonably cold November, but it’s important to remember that the average daytime high in December for the Mid-South is in the mid-40 to 50-degree range, and the weather has been much more seasonal as of late. When the weather is like that, I see as many deer in green pastures, hay fields, cover-crop wheat and rye fields, and food plots as anywhere else. Large groups of does and fawns often gather to feed in these areas, and cruising bucks—like the one on my trail camera last Friday—will check them out to find one last girlfriend for the year.