Hints of the Pre-Rut in the Mid-South

Though it’s still very much the early season for much of the region, numerous rubs and the first active scrapes... 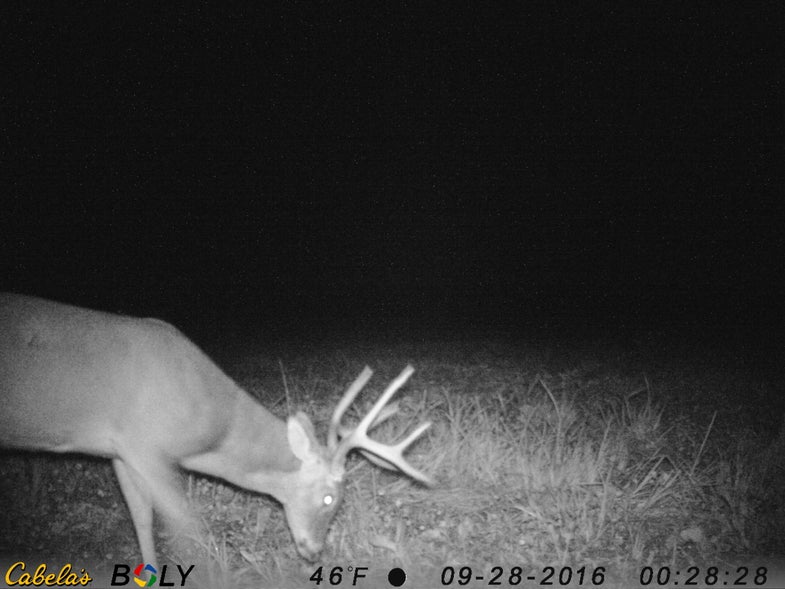 Bucks in Kentucky and Tennessee are getting serious about rubs and scrapes. This guy is making a scrape on the edge of a food plot. Will Brantley
SHARE

Though it’s still very much the early season for much of the region, numerous rubs and the first active scrapes are appearing farther north. In the past week, I’ve found fresh buck sign in both Kentucky and Tennessee. I captured this photo of a mature 8-point making a scrape on the edge of a food plot late last week.

My trail camera photos still show many bucks running together in bachelor groups, but sequences taken over food plots reveal frequent sparing and posturing. It’s a sign of things to come. Many of the mature bucks I’m seeing on camera seem to be running solo.

This week is still a great time to hunt the edges of primary food sources and catch a buck during the final days of his early season pattern, but don’t expect it to last long. Soon, the bachelor groups will be busting up, and individual animals will establish core areas prior to the rut. You may need to adjust your hunting strategies accordingly.

Still, don’t overthink things. Food will continue to dominate a buck’s activity for the next several weeks. Furthermore, the food sources deer are using now probably won’t change much before the first of November. That means it’s a great time to begin patterning does for the days ahead. My best hunts during the seeking and chasing phase of the rut have been in areas where I’ve patterned numbers of mature does in October.

Finally, pay particular attention to forecast cold fronts. Deer are now wearing their winter coats, but as every southern hunter knows, we have as many 80-degree days as we do 60-degree days in October. The weather simply has a huge impact on daylight movement right now.