Hit-and-Miss Conditions for the Weekend

Overall Activity Status: Although we’ve had some cool evenings over the past week, the daytime weather has been rather hot... 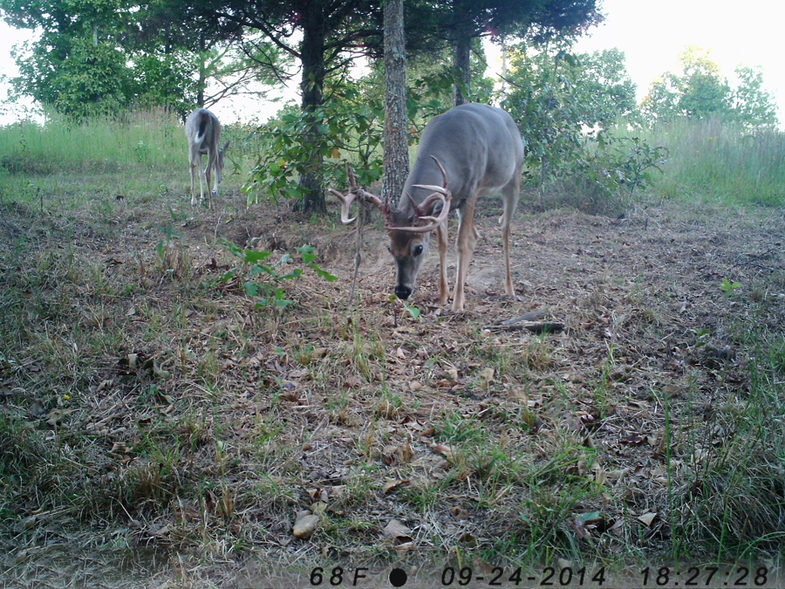 Overall Activity Status: Although we’ve had some cool evenings over the past week, the daytime weather has been rather hot and stale, with a persistent east wind. It’s kept me mostly out of the woods, but judging by the two trail camera cards I just pulled, I haven’t missed much…until yesterday afternoon. That buck in the photo, which is amazingly just now shedding his velvet, is standing 24.3 yards from my ground blind.

Fighting: Nothing serious yet, although both card pulls showed bucks posturing around bait sites. The one in the photo definitely held onto his velvet longer than any of the other “regulars” on our little farm, and I’ve not seen anyone post a picture of a velvet buck in more than a week. So gentle sparring should be a part of the daily program right now, even though bachelor groups are in various phases of breaking up.

Rub making: I’ve not seen any rubs, but Carl Doron, owner of Snipe Creek Hunting Lodge in Kentucky, posted a photo of a fresh rub photo on Facebook earlier this week.

Scrape making: Nothing to report, although that favored licking branch, which you can see in the background of the photo above, received a ton of attention from various bucks, this one included, over the past week.

Daytime movement: Things have been slow, due largely, I believe, to the warm daytime weather. High temperatures have been a few degrees above average the past several days in a row.

X Factor: Both Tennessee and West Virginia archery seasons open this weekend, making Virginia the lone Mid-South deer-season holdout (it opens next weekend, Oct. 4). In general, early season conditions persist throughout the region. Acorns, where they’re found, are falling now, and it seems a big percentage of the Mid-South cornfields have been harvested. Combine that with hot weather and bucks that have shed their velvet and are beginning to establish their fall territories, and you’re left with the variety of conditions that always make this time of year notoriously hit-and-miss.

The notes above illustrate that perfectly. On the one hand, a week’s worth of trail camera photos on a 70-acre farm tell me that most of the deer activity over the past few days has been at night. On the other hand, I had a sure-enough shooter appear in broad daylight in front of my ground blind only yesterday afternoon.

It’s all enough to drive a man crazy. And it’s precisely why I love hunting whitetails so much.