Hunting the Dregs of Summer Patterns Yields a Trophy

Since July, Tennessee hunter Kerry B. Wix has been watching a bachelor group on his trail cameras. The regulars included... 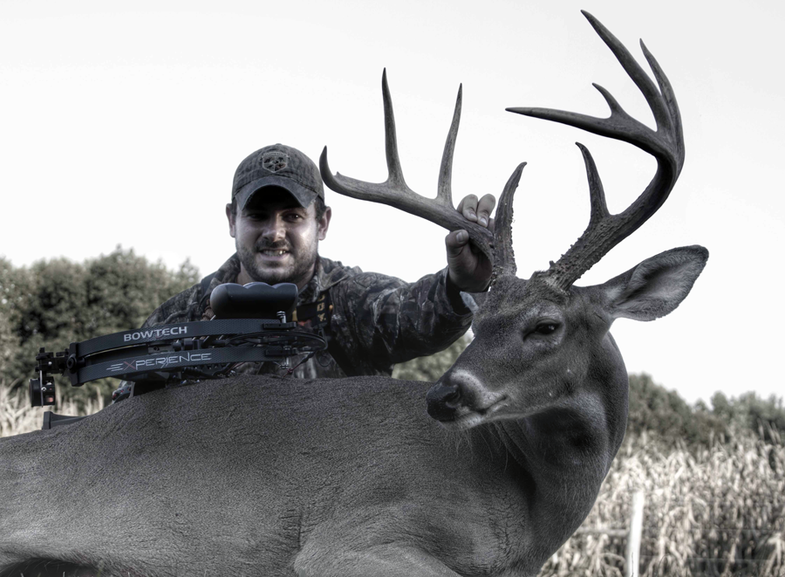 Since July, Tennessee hunter Kerry B. Wix has been watching a bachelor group on his trail cameras. The regulars included a pair of solid shooter bucks—a big 8-pointer and a big 9-pointer—as well as a young forkhorn.

“They were as predictable as any bucks I’ve ever seen,” Wix says. “They seemed to be bedding near a standing corn field, but they came out into a mowed field every morning at 6:30, and again every evening at 6:30. They’ve been doing that all summer, so I’ve really been counting down until opening day.”

Wix says the mowed field the bucks were using wasn’t a food plot per se, but it was full of volunteer clover and other green goodies the bucks seemed to like. He watched the bucks on camera all summer, and then stayed completely away from the area in the two weeks leading up to opening day.

The season opened last Saturday, the 27th, and Wix wanted to hunt in the worst way on the opener, but the wind was wrong for his stand. “Bad as I wanted to hunt, I decided to wait for Sunday evening, when the forecast was a little better,” he says.

He was settled into his stand early on Sunday, and to pass the time, he’d swiped the card from his camera and was reviewing the photos from the tree with a card reader. “It looked like my luck had gone south at first,” he says. “Two weeks’ worth of photos showed that the bucks had shed their velvet, and for the past week, most of their activity had been after dark. But as I neared the end of the photo list, I discovered that they’d been in the field that very morning at 6:30, same as always. That really lifted my hopes. I thought I might get one more crack at them on their summer pattern.”

The hours passed, and finally, it was go-time. “I was on red alert when 6:30 hit, but the bucks didn’t show up right away,” he says. “But at 6:40, I glanced down the field and saw them coming. They trotted right into the clover plot, and I’d made up my mind that I’d shoot either the 8 or the 9 given the opportunity.”

The bucks postured and sparred a bit, and one of the two bigger deer even ran the forkhorn off the field and back into the timber. But before long, it all came together. The 9-pointer stopped at 20 yards, and Wix took the shot. The buck scrambled just 30 yards before piling up.

It’s an impressive deer for anywhere, but especially for Tennessee. “He’s my biggest Tennessee buck to date,” Wix says. “I haven’t measured him, but I guessed him at 147 to 150 inches. I was lucky to get him when I did. I think their summer pattern days were coming to an end fast.”