In Most Places, The Pre-Rut is Popping

Overall activity status: Buck activity has been increasing daily. Although a warm spell has set in the past couple days,... 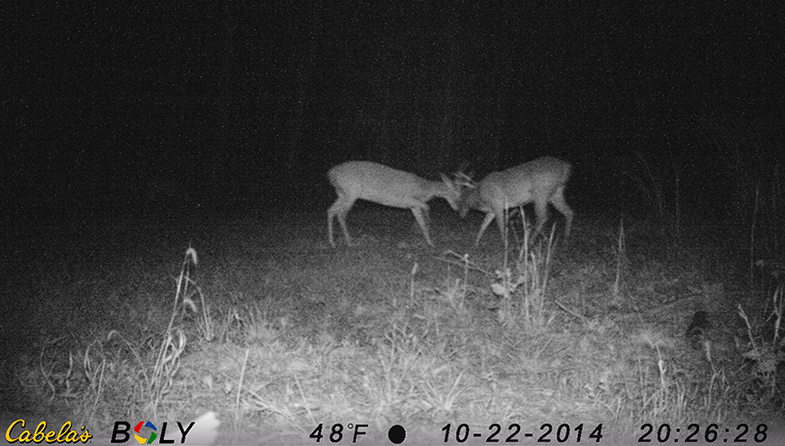 Overall activity status: Buck activity has been increasing daily. Although a warm spell has set in the past couple days, last week’s cool weather brought with it some outstanding hunting. Chris Ryan, who works for the West Virginia Division of Natural Resources, says conditions have been about perfect up to this point in the season, and he expects to see good rutting activity within the next week.

“We’ve had a lot of good weather, and hunters are seeing a bunch of deer and buck sign. I’ve been out a few times myself and have shot a few does. I’ve seen bucks fighting. Snort-wheezing. Chasing each other. They’re really doing the pre-rut stuff right now. And everything is in peak condition. Our mast crop isn’t a record, but it’s close. The does are rolling in fat. Typically, that means they’ll come into estrus earlier, and the rut activity will be more condensed.”

Fighting: Fights are commonplace now, it seems. Ryan referenced bucks fighting in his report from West Virginia, and I captured the above trail camera photo of two bucks locked up in a turnip plot during last week’s cool snap. I plan to do some rattling this week.

Rub making: Rubs are abundant. Last Friday evening I climbed into a stand that I’d hunted maybe a week before. I counted three new obvious rubs visible from my perch.

Scrape making: Numerous hunters have reported intense scraping activity this year, and it doesn’t show any signs of slowing down. I’m finding fresh scrapes every trip into the woods, and am getting near-immediate responses to mock scrapes.

Chasing: Nothing to report yet, but we’re close. I expect to see a buck chasing a doe any day now.

Daytime movement: The warm weather over the past three days has definitely stifled daylight activity, but deer were on the move during last week’s cool snap. This week’s forecast calls for a temperature plunge that should get deer back on their feet during shooting light.

Estrous signs: Nothing yet. Does and fawns are still traveling together.

X Factor: Not all areas of the Mid-South are on the same rut schedule. Just north of Memphis, little more than 100 miles from me, bowhunter Jimbo Robinson is seeing plenty of deer that are still on early season patterns. In that part of the world, the best rutting activity often isn’t until the first of December.

“Young bucks are still traveling together in groups,” he says. “Older bucks have split away, but we’re just now finding rubs and a few little scrapes. They’re still hitting the bean fields a bit, and they’re hammering the acorns. We have a huge mast crop, same as everywhere else,” Robinson says.

Curiously, Robinson has been seeing some of the best action during the midday hours. “There are huge numbers of deer here,” he says. “I sat this past Sunday from 9 a.m. to 3 p.m. and saw 46 deer. Just roaming the timber, gobbling up acorns. I’ve carried a climbing stand and hunted midday three times, just to see what the deer would do. And they’ve been moving like crazy.”