You know it’s a special time of year when your wife comes home from the grocery store with bread, milk,... 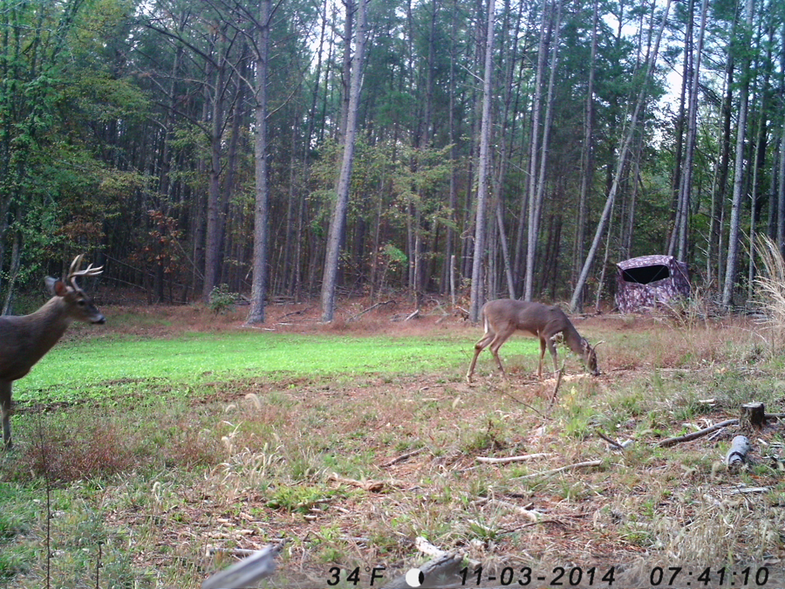 You know it’s a special time of year when your wife comes home from the grocery store with bread, milk, and three varieties of deer pee. With the Kentucky gun season opening this Saturday and Michelle’s evening hunts after work cut short by the time change, she’s eager to get in a stand.

And for good reason. Fellow Rut Reporter and Field & Stream Whitetails columnist Scott Bestul hit the nail on the head when he picked November 7 as the best day of the rut for 2014.

There’s been a steady increase of buck activity over the past 10 days. A few does have probably come into heat already, but the peak breeding is still a week or more away. Young-buck activity is at a fevered pitch. A few big deer are being seen here and there, but I think mature deer sightings will increase dramatically in the days ahead.

The best deer movement is still mostly early in the morning and late in the evening, but I’ve gotten trail camera photos of deer at literally all hours of the day this week. Atop all of that build-up, a stout cold front is supposed to drop overnight lows into the 20s throughout the Mid-South this weekend and early next week. It’s a recipe for outstanding hunting.

Though I’ve personally had a run of extremely tough luck this season, it hasn’t been caused by a lack of deer sightings. Backing off the field-edge food sources—which are my perennial favorite places to hunt—and hunting pinch points in the timber has resulted in action virtually every sit this week.

Most of the pinch points I’ve been hunting have had plenty of nearby oaks, and numbers of deer are lingering there in shooting light to feed on the still-abundant acorns. I had a gorgeous 10-pointer run a doe right past a stand set in just such a spot at 7:30 Monday morning. I should’ve killed him … but that’s hunting. My second-choice stands have been small, hidden food plots that have been hubs of doe activity all season. Quite a few bucks are cruising through to check those plots and grab a quick bite. The trail camera that snapped the photo above of those two young bucks is set over a ¼-acre brassica/winter wheat plot that’s surrounded by timber.

Compound these ideal conditions with open firearms seasons across the region, and you can expect some big Mid-South bucks to hit the ground over the next few days. Tennessee’s muzzleloader season opens this Saturday, and the Virginia muzzleloader season is open right now. Various North Carolina zones are open, or about to open, to firearms or muzzleloader hunting. West Virginia is the lone Mid-South holdout for an open firearm’s season this weekend, with their general gun opener set for Nov. 24.