Parts of the Mid-South on Track for Record Harvest

I had a first last Saturday evening. Michelle shot a buck and I actually floated it across the floodwater in... 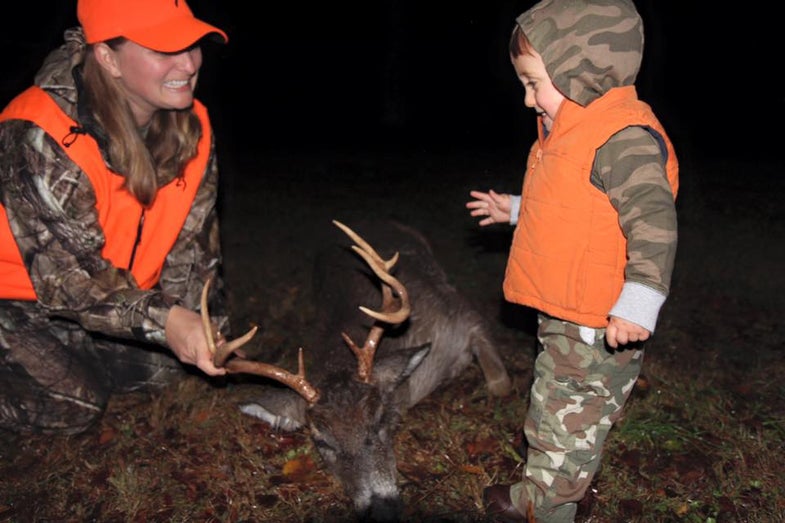 I had a first last Saturday evening. Michelle shot a buck and I actually floated it across the floodwater in our back yard to the skinning tree (but not before allowing our son, Anse, a little time to admire it; that’s them in the photo above). The amount of rain we’ve had in the Mid-South over the past week has been staggering, and it’s created fairly tough hunting conditions during the tail-end of the rut.

Still, judging by the numbers, November was good overall. Jon Shaw, deer biologist for the North Carolina Wildlife Resources Commission, says that while final numbers aren’t quite in, the harvest is up compared to last year. “We had some warm, rainy days that made it tough at times, but overall, it appears to have been a good season so far,” he says.

Kentucky hunters had a record gun season and a record November. In fact, we’re on track for a record overall harvest in the Bluegrass State, and with a month and a half of season remaining.

Though the bulk of the rut action is over in the Mid-South, you could still see a buck chasing a doe about anywhere at any time. My buddy watched a spike pushing a doe fawn yesterday in western Kentucky. And a few pockets of the region—including western North Carolina and southwestern Tennessee—have peak fawn conception during the first week in December.

Long story short, there’s still a lot of good hunting left between now and the end of season. Yesterday, the sun even popped out.