Rubs are Popping; Use Them to Score

This fall is on a fast track. It seems like I was putting out mineral and trail cameras just days... 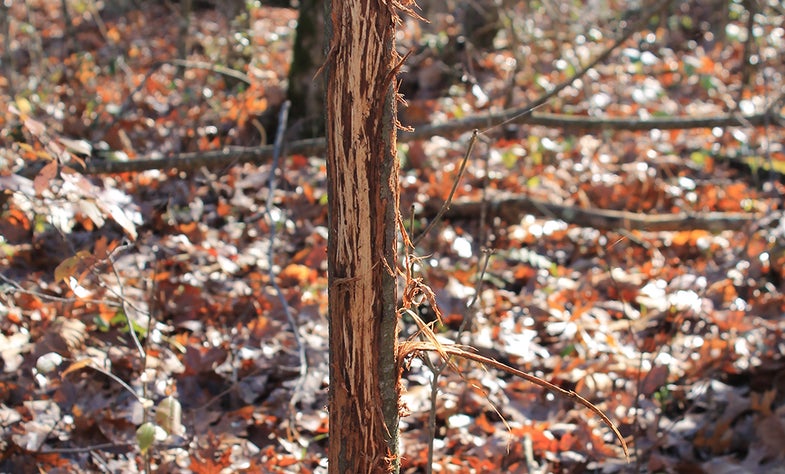 This fall is on a fast track. It seems like I was putting out mineral and trail cameras just days ago. That was June. Now, it’s the middle of September and I’m thinking about buck sign, especially rubs, which are popping up all across the South, right on schedule. There are a few small pockets in Louisiana, Alabama, and Georgia where some bucks are still in velvet, but they should shed within the next few days.

With all of these hard-horned deer, you can expect a major uptick in freshly raked saplings, plus a steady increase in activity until the seeking and chasing phases of the rut begin in your area.

I always get excited when I see that first rub of the year. Most hunters do. But what many hunters don’t do is use rubs effectively. Here’s a step-by-step plan on how to kill a buck using rubs.

Step 1: Find the rubs.
The best place to start is around the edges of food sources. If food sources don’t produce, search sections of timber between known food sources and bedding areas. Be careful, though. Bucks are still bedding close to the dinner table. Finding a few rubs isn’t worth pushing a deer out of the area.

Step 2: Look for more.
Once you find one, search for others in close proximity. I’ve always stood behind the fact that a single rub means nothing to a hunter. But find a string of rubs together, and it’s a whole new ball game.

Step 3: Figure out direction of travel.
Once you find a legitimate rub line (three or more rubs in a row) look to see which side of the tree the rubs are on, which tells you what direction the deer was heading in when he made it. Some rubs are made as a buck goes back to bed in the morning; but most are made in the evening after a deer rises from its bed to feed.

Step 4: Plot it all out.
Mark the rub line on an aerial map or satellite image, which will help reveal where the buck is feeding (if it isn’t already obvious) and where he is probably bedding (think thick cover and rugged terrain).

Follow the rub line a short ways into the woods from the food source. Don’t go far, and definitely don’t follow it all the way. (Getting too close to the buck’s bed may spoil any chance you have of killing him.) Go as far as you dare and hang a camera. Put it about 10 yards off the trail and angle it back toward where the deer should come from. Don’t place it right on his path. He’ll know you’re onto him if he notices the camera.

Step 7: Get the shot.
Give it a few days before checking it. When you get a buck on film, check the date and timestamp information. What you want to see is a buck that’s rubbing trees on his way to the grub during daylight.

Step 8: Move in for the kill.
Hit the woods early and hang a treestand the same day you’ll hunt the spot. Your first hunt is your best chance at success. Place the stand 15 yards downwind of the rub line and sit tight. If he’s showing in daylight, you are just few hours away from filling your buck tag.