Rut is at Peak in Three States

Overall activity status: The rut is peaking in Arkansas, South Carolina, and Georgia. Reports abound of mature bucks chasing does,... 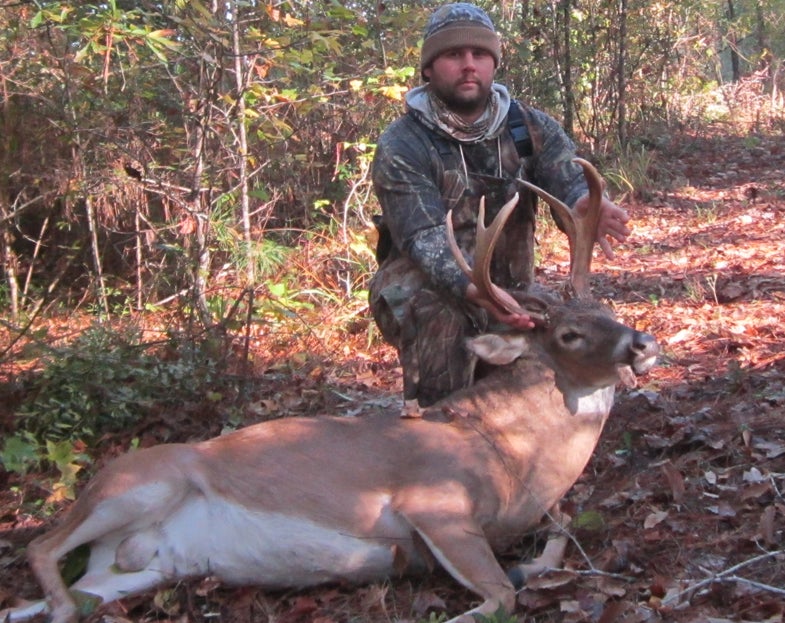 Overall activity status: The rut is peaking in Arkansas, South Carolina, and Georgia. Reports abound of mature bucks chasing does, with many of them ending up in the back of pickup trucks. The recent cold weather is contributing to the good movement.

We’re edging closer to the pre-rut in Alabama, Louisiana, and Mississippi, where buck sign should be showing up more and more.

Fighting: Pre-rut and rut bucks are likely to fight, especially when an estrous doe is around. However if a buck has an estrous doe with him, nothing will pull him away.

Rub making: Pre-rut states like Mississippi are starting to see more rut sign. “I am seeing rubs and scrapes in North Mississippi,” reports Brian McGregor. “Last week while bowhunting I watched a really nice 8-point getting very aggressive with some saplings.” Expect to see more rubbing in Alabama, Louisiana, and Mississippi.

Scrape making: Scraping is also increasing in pre-rut states. “The bucks here in northeast Alabama are just starting to break up out of their bachelor groups,” said Shane Dempsey. “I am starting to see some rubs and a few scrapes. We have a bumper crop of acorns this year, so sightings have been limited but I have managed to kill a doe and have seen several nice bucks including a ‘hoss’ 12-pointer that I couldn’t get a shot at.”

Chasing: There is no better time to catch a mature buck up and moving during the daytime than during the rut, and especially when he is chasing a doe. That’s just what Joey Bickford of Valdosta, Georgia experienced while hunting a public hunting area in central Georgia. It was a windy afternoon when Joey got to his stand, and after only 30 minutes, he spotted a doe coming his way. Right behind her was a magnificent buck that stopped 45yards away. Fearful the doe would lead the buck away, Joey took a straight-on chest shot and dropped the buck on the spot.

The buck, shown here with Bickford, was a 180-pound 4 ½-year-old 16-pointer with a double main beam. The taxidermist estimated its score in the 180s.
Bucks are chasing in South Carolina, Arkansas, and Georgia, and you never know when a giant will show up.

Daytime movement: Movement during daylight is good in rut states, particularly when bucks are chasing does. They may also be seen checking scrapes. Brandon Arrant hunts in Union County, Arkansas, and shot the heavy, mature six-pointer shown at top last weekend, Nov. 9. “I shot the buck Sunday morning at 6:20 a.m. I saw him at 6:15, when he came out on the edge of big timber beside a cutover, working scrapes. I guess the bright moon that was still out that morning as the sun was coming up had him late getting to bed while he was freshening his scrapes up. He was a 5 ½-year-old deer and weighed 225 pounds,” said Arrant.

Estrous signs: Numerous reports of mature bucks chasing does in Georgia, South Carolina and Arkansas is clear proof that does there are in heat.

X-Factor: If you’re not seeing chasing bucks where you hunt, consider watching scrapes, like Arrant was doing when he killed his buck. You may catch a buck that is not with a doe.