Rut Mostly Over in South Carolina

Things are slowing way down here. That’s why you see a photo of me checking a trail camera, instead of... 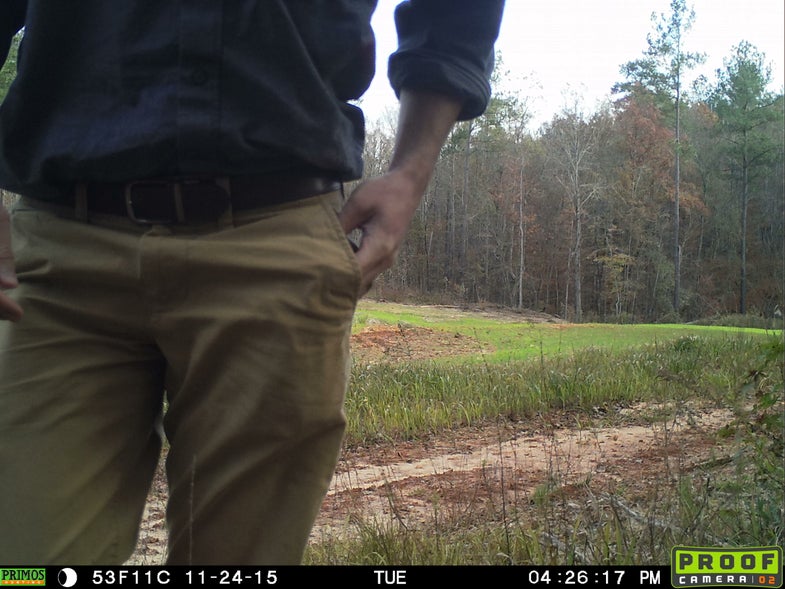 Things are slowing way down here. That’s why you see a photo of me checking a trail camera, instead of a deer walking past it. It’s depressing. Since the rut has played out, deer sightings and trail camera photos have been minimal. Part of that is due to hunting pressure. Even though it’s private land, the place I hunt the most sees a lot of pressure each fall.

Another reason deer activity has dropped off is because deer are recuperating. I’ve never conducted a tracking study to see if deer move less just after the rut. But my years of time spent in a treestand show me that late November / early December is always a slow period for deer movement. It seems to pick back up around the second week of December, due perhaps to some secondary rut activity.

Pete Muller, a good friend and past associate, is seeing much the same. “The last chasing deer I saw on camera was around November 14,” he said.

Still, there’s a lot of season left, and I’ll be hitting it hard over the next two weeks. And I’m officially in meat hunting mode. Does are in trouble.

Overall Activity Status: Deer activity is slow right now. Expect it to pick back up within the next two weeks.

Fighting: No fighting within the last two weeks.

Rub Making: I haven’t found any fresh rubs. My contacts in the state aren’t seeing any, either.

Scraping: Bucks are reopening a handful of scrapes as receptive does become scarce.

Chasing: None of my contacts have seen a buck chase a doe within the last week and a half.

X-Factor: Temperatures are supposed to drop significantly by this weekend. Rut or no rut, colder weather should put deer on their feet to feed. It’s almost time to think about late-season strategies.