Saturday morning, the modern gun opener in Kentucky, dawned clear and cold. I was sitting in my climbing stand on... 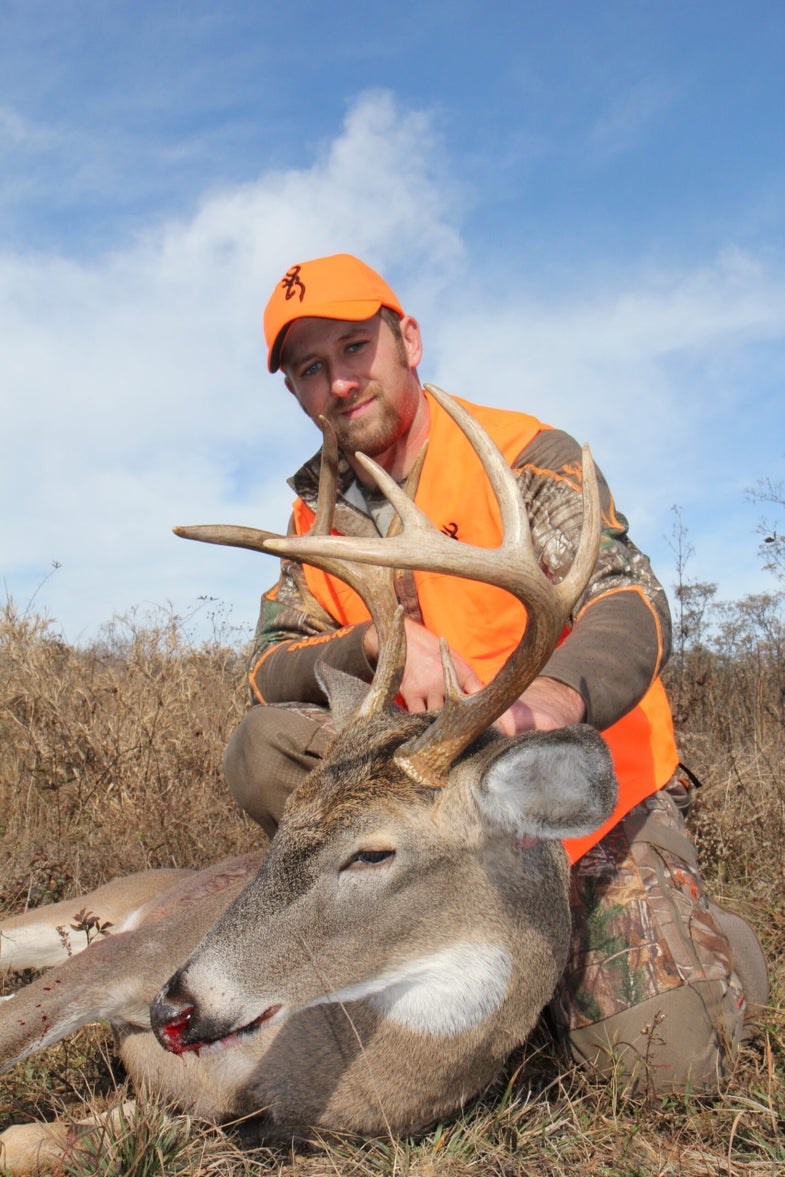 Saturday morning, the modern gun opener in Kentucky, dawned clear and cold. I was sitting in my climbing stand on a hardwood ridge, holding a .30-06. Michelle was in a shooting house on the far side of the farm. It sounded like a war zone at daylight, with shots near and far. My phone buzzed half a dozen times with texts from buddies checking in with reports of filled tags and big bucks running amuck. Seemed it was “happening” everywhere except on our farm.

Michelle hunted daylight to dark on opening day. I climbed down at noon, ran to town to get us lunch, and was back in the stand by 2. By the end of shooting light, I’d seen one spike, and she’d seen a couple small bucks and fawns. I couldn’t believe our bad luck—I knew we were in an area full of deer, and it seemed every neighbor around us was in the action.

We switched things up the next morning. I sat in the shooting house, and Michelle climbed into a ladder stand overlooking a small rye grass food plot. Thirty minutes after daylight a nice-looking buck came tearing through the woods, chasing a doe across the field 220 yards from the shooting house. I recognized him as a buck we’d been seeing on camera all summer—and one that Michelle had passed twice with a bow—and held my fire. The buck chased that doe across a blacktop road and right past Michelle, who got another good look at him at 40 yards. She passed on him again.

Within minutes, a spike crossed the same field below me, scent-checking for the doe that the other buck had just chased through. He no sooner dropped out of sight than yet another buck appeared, nose down on the same path and moving fast. I could see him from the rear—he looked pretty good—and when I got my scope on him, I counted five tines on one side. I had seconds to make a decision, so I shot him. Turns out, the buck I’d just passed was bigger, but hey, this is real-world deer hunting. They don’t always stand there long enough to go down the checklist of body characteristics and antler score.

It’s amazing to me to watch how quickly things can turn around during the rut. As we’re digesting our yearly dose of rut-hunting tips and looking through trail camera photos in the early fall, we imagine non-stop action on a cold day in mid-November. We pack lunches and Thermos bottles of coffee, and plan to grind it out daylight till dark. When the action just doesn’t happen like we’d envisioned, we assume we’re doing something wrong.

It’s certainly possible to burn up your best rut days sitting in the wrong stand. If you’re certain some does are around, you’re not in the wrong stand—but that’s still no guarantee each sit will be action-packed. At 70 acres, our farm isn’t big enough to hold any deer all the time. But we knew we had several family groups of does using our farm on a regular basis. They weren’t casually stepping into food plots very often—blame that on the bucks and the surge of hunting pressure from gun season—but they hadn’t gone far, either. It only took one of them coming into heat and running through our farm to suddenly bring bucks out of the woodwork and make our stand choices seem like very good ones.

This time of year, a single hot doe can turn your entire day, weekend, or season around. Their movements are unpredictable—even chaotic—and so you just have to park it in places where you’re most likely to see them. When you do seem them, they’ll usually have company in tow.