Scraping Is On The Rise 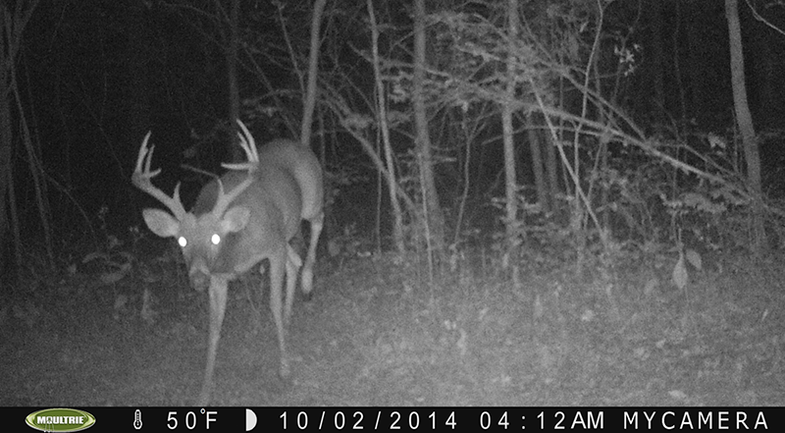 Overall activity status: Last week’s late-summer weather finally broke after a strong cold front blew through the Mid-South on Friday. I got to see the show from a box blind Friday evening. An hour of torrential rain was followed by a cold north wind that dropped overnight temperatures some 30 degrees from the previous day. Daylight deer activity was outstanding immediately following the front and all weekend.

Fighting: Bachelor groups are all but completely broken up now. We saw several bucks over the weekend, and all but two of them (both youngsters) were running solo. This is a sure sign bucks are establishing fall territories.

Rub making: I’ve yet to find that first rub, but that’s just by happenstance. I’ve been sticking to a few fairly direct routes to my stands lately—routes that are hopefully different than those the deer prefer—and so I wouldn’t expect to see many rubs. But they’re out there.

Scrape making: I noted and photographed the first scrape of the season last week. I hung a camera over that scrape and left the area alone for a week. Checking it yesterday showed there’s been pretty good buck activity in front of it the entire time, including the 10-pointer in the photo above. There was a newer, fresher scrape 20 yards from the camera, too.

Daytime movement: The weekend’s cold front has created delightful hunting weather. Leaves are changing colors and falling, and the forest floor is covered with acorns. Deer movement over the weekend was still excellent around fields and food plots. Evening activity was still restricted to the final hour of shooting light, but virtually all the morning sightings were from 8:30 to 10 a.m.

Estrous signs: Nothing yet. We saw numerous groups of does and fawns over the weekend. Fawns are just now losing their spots, and will be sticking close to the does for at least another month.

X Factor: One of the best things about being a Rut Reporter is that it creates a week-by-week journal of deer season activity. After a few years, trends emerge that are easy to confirm simply by reading through old posts. One trend I’m seeing this year is the potential for an early rut. Chris Ryan with the West Virginia Division of Natural Resources has been telling me for years that a heavy mast crop puts does in prime condition, and that often leads to earlier peak breeding. Last year, we nearly had a mast failure, and the best rut activity seemed to be in mid-November—a couple weeks later than normal—as a result.

This year, of course, we have acorns everywhere. Although it’s still too early to say for sure, I can’t wait to see if Ryan’s predictions for an earlier rut hold true.

And speaking of predictions, I’ll make one of my own, just for fun: We will see a period of painfully slow hunting in the next week. Plenty of biologists who know more about whitetail natural history than I do say there is no such thing as the October lull. But season after season has shown me that in the days surrounding the full moon of October (Oct. 8 this year), daylight deer movement slows to a crawl. I’ve lost count of the number of sits I’ve made during this time period without seeing a single deer. It is a definite lull that’s easy to document … and it happens every October. So call it whatever you’d like. We’ll see if the trend holds true this year. In the meantime, leave me a comment and let me know what you’re seeing in your part of the Mid-South.