Textbook Late Season in the Mid-South

Overall Activity Status: In general, deer movement has been pretty good here in the Mid-South over the past week or... 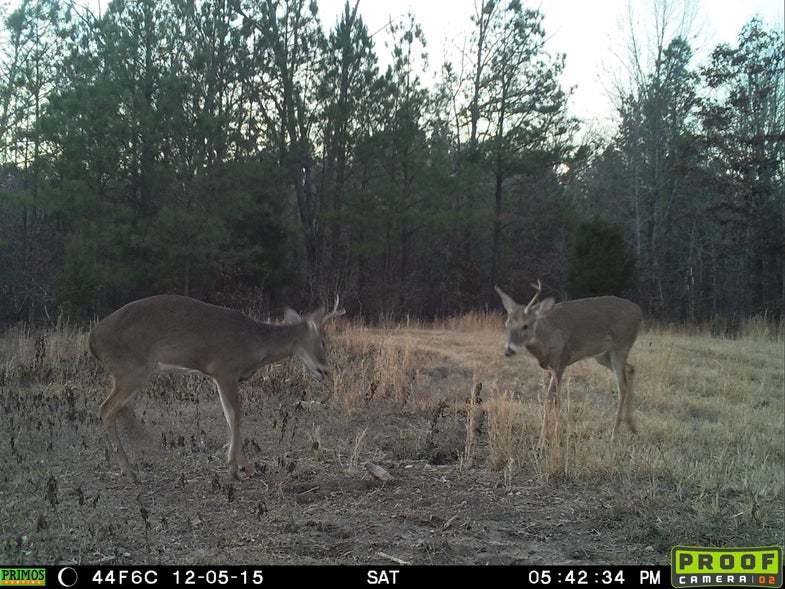 Overall Activity Status: In general, deer movement has been pretty good here in the Mid-South over the past week or so. Trail camera photos, early morning / late evening errand runs, and even a few quick hunts have shown deer are on their feet and back to feeding on a fairly normal schedule. Much of the action is in open fields, too. Because the weather has been so mild, we still have an abundance of green forbs and other browse growing along field edges right now, and I’ve seen deer standing around eating that stuff more than anything else.

Action from the “second rut” seems to be pretty hit and miss. Typically, the second rut around here seems to be an opportunistic type of thing. I’ve never seen what I felt was a large wave of does, even young does, coming into heat all at once, and so the chasing and seeking activity from bucks is usually minimal. Yet, it’s still common to see a buck locked down with a doe. Because the does are getting back on regular feeding patterns, my advice is to place yourself in an area with as many of them as possible—usually a primary food source—and play the odds. The bucks aren’t straying as far from their home ranges right now. Plus, they have to eat, too. Hunting food, especially in the evenings, is becoming your best bet for the remainder of the Mid-South season.

Fighting: Bucks are worn down by this point, but they’re not quite ready to become buddies again. You can see the two youngsters in the trail camera photo above are posturing, and it appears both of them have broken off main beams at some point this fall.

Rub Making: There’s an abundance of fresh rubs in the woods right now.

Scraping: Although there was a flurry of scraping activity a week or so ago, that action seems to have slowed a bit now. I did a trail camera check earlier this week, and the usual scrape circuit has gone cold again.

Chasing: On again, off again. As mentioned, you’re not likely to see a bunch of dramatic chasing during the second rut. Instead, as South reporter Josh Honeycutt pointed out earlier this week, bucks and does seem to get right down to business and lock down quickly this time of year.

Estrous Signs: I haven’t seen much. Most of the deer that I am seeing, in fact, are does and now-grown fawns running together in winter herds.

X-Factor: When you read of a late-season hunting tactic, the assumption is that it’ll be cold outside. But right now and for the next few days, the weather is forecast to be in the 60s and even low 70s around here. When that’s the case, “traditional” late-season foods—corn, soybeans, brassicas—may not be as attractive to deer as lighter fare, especially green browse. If your yard is like mine and could still use a mowing in a few places, you can bet there’s still enough green stuff growing in the deer woods to make the hunting a bit tough. Serious cold weather is needed to create the late-season hunting conditions you’ve read about, but the reality is, we may not get that weather any time in the foreseeable future—and perhaps not before deer season is over. But the deer are still out there. The best hunters take stock of the conditions they’re dealt and react accordingly. If you’re a Mid-South hunter, that has to be your game plan right now. After all, the surest way not to get a deer is to stay at home.