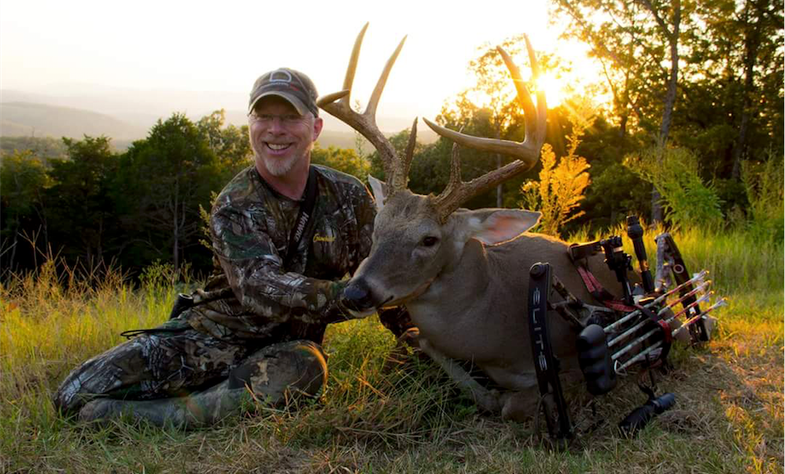 Phillip Vanderpool, host of The Virtue, spends most of his time on the road, but enjoys hunting the Arkansas Ozarks. He usually puts a good one down there each season. The buck shown in the picture above fell about this time last year. Needless to say, Vanderpool knows how to target pre-rut bucks. He’s at it again, spending all of this week hunting in his home state of Arkansas.

“I’ve hunted here the last several days,” Vanderpool said. “The first day was slow. But a lot of hunters hunt around here because it’s close to public land. The second day was cooler with a North wind. I saw 14 deer. It warmed back up the third day and all movement came right at dark.”

The main message here: Deer aren’t moving much during daylight hours. Weather is a major factor. Changing food sources have something to do with it as well. Limited water supplies seem to be congregating deer in the dryer areas of the state, too.

“White acorns are everywhere,” Vanderpool said. “There are a lot of acorns this year. It’s making the hunting a lot tougher. Find a flat with a bunch of white oaks and a nearby water source. It’s really dry here right now. I recommend hunting close to water. Try places with persimmons or acorns close to water sources.”

Mature bucks still aren’t venturing far from their bedrooms during daylight hours. Scout intensively—yet carefully—so you know how close you can get to their bedroom. Only get as close as you need to be to intercept them during daylight. Food sources—specifically acorns—are abundant this year. Good woodsmanship, serious scouting efforts and blessings from God will be necessary for success.

As for buck sign, it’s on the rise. Vanderpool is seeing quite a bit of it.

“Bucks are scraping big time down here right now,” he said. “White oak trees are dropping acorns everywhere. I’m starting to see rubbing kick back in gear after the first initial flurry of rubs when they first came out of velvet.”

Chasing isn’t much of a factor yet. Younger bucks have it on their minds and they’re exhibiting the typical juvenile behavior. Mature bucks have yet to join in on the fun.

“Young bucks—yearlings and 2½-year-olds—have been feeling frisky the last few days,” Vanderpool sad. “They’re bumping does around and beginning to chase. The does are shying away as soon as they spot a buck.”

That generally means the big dance isn’t too far off.

Vanderpool predicts this weekend will be one of the best times to hunt in quite a while. A major cold front is pushing through and that should put deer on their feet. Hunt the front and back end of the front.

Much is the same throughout the rest of the south. Most areas seem to be in a holding pattern. A few hotspots in Florida and Louisiana are seeing rut behavior. The rest are either still in early season patterns or about to enter the pre-rut phase.

As Vanderpool mentioned, time the oncoming cold front. It will be the ticket to a mid-October kill.