Young Bucks on the Move in the Mid-South

Rainy, dreary weather has made the hunting a little tough this week in the Mid-South. While a light drizzle no... 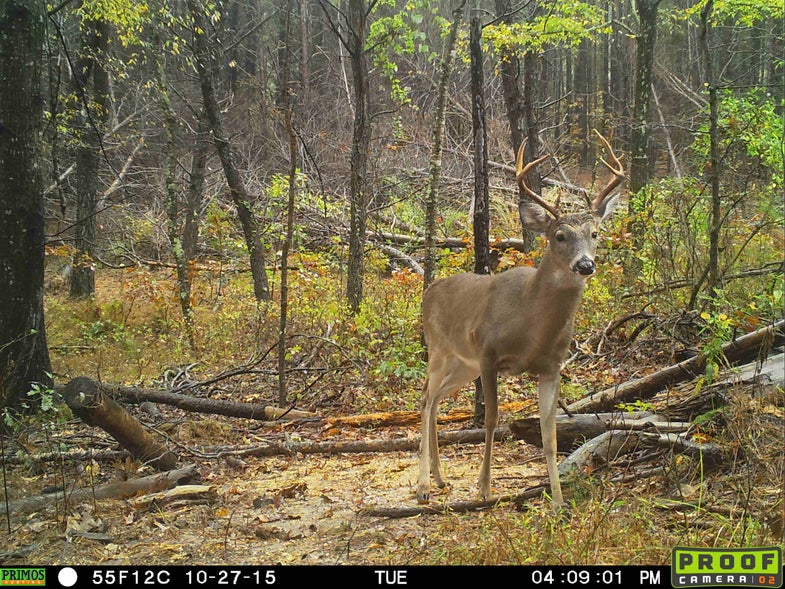 Rainy, dreary weather has made the hunting a little tough this week in the Mid-South. While a light drizzle no doubt puts deer on the move at times—especially when paired with some chilly air—the rain has been pretty heavy this week. It’s made sitting in a stand unpleasant at best. Moreover, I’m personally not crazy about shooting a deer with a bow when it’s pouring down rain.

Still, it’s that time of year. Younger bucks are definitely feeling their oats, and are up and cruising at all hours of the day. On Tuesday—a day that I sat out because it was just raining too hard—I got a trail camera photo of this great-looking young buck at 4 in the afternoon.

I did slip out for a few hours of hunting this morning. The rain had finally subsided, and it cleared off. At 50 degrees it wasn’t cold, but it was quite a bit cooler than it has been lately. I watched a constant parade of does and fawns on a big oak ridge. The only buck I saw was a basket-racked 4-point, but he must’ve made five laps around that ridge, aggravating the hell out of those does. I expect to see the first mature buck doing that same thing at about any time now.

Scraping: I’m seeing a lot of scrapes in the woods right now, too. Larger, primary scrapes are being freshened up nightly.

Chasing: As mentioned, young bucks are beginning to chase quite a bit right now, but the best of the activity is yet to come. ****

Estrous Signs: Little to report just yet. I am seeing a few lone fawns here and there, but for the most part, does and little ones are still traveling together. ****

X-Factor: Quite a few gun seasons open soon here in the Mid-South region, and the timing looks pretty good. The two-day Tennessee youth season is this weekend, and Tennessee’s muzzleloader season opens next Saturday, November 7. With the exception of southwest Tennessee—which sees a little later rut than the rest of the state—gun hunters in the Volunteer State should be in for some outstanding action. Muzzleloader seasons in the Central and Northwestern zones of North Carolina also open this weekend and next weekend, respectively. Virginia’s first muzzleloader seasons open this Saturday as well.