In the early summer, when the DTs from hunting withdrawal are really peaking, I start dreaming of axis deer. Generally,... 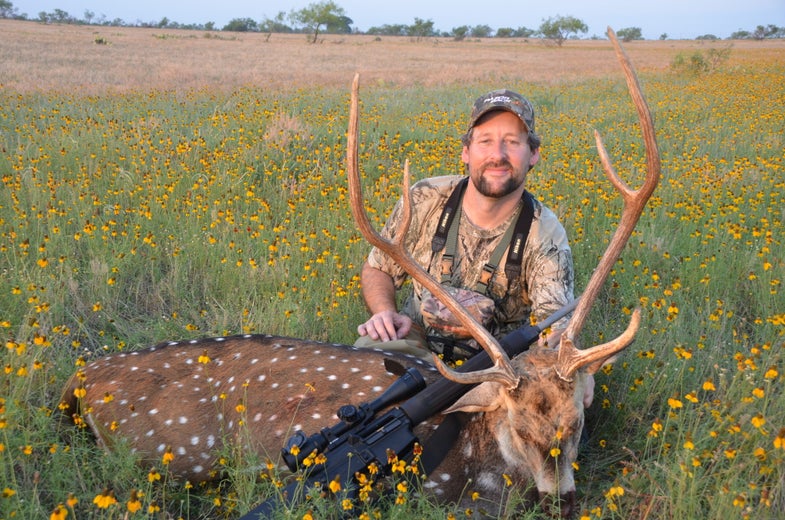 In the early summer, when the DTs from hunting withdrawal are really peaking, I start dreaming of axis deer. Generally, I’m not much on hunting exotics, but something about chital, as these spotted deer are known in their native India, has captured my imagination. It could be that distinctive coat, similar to a whitetail fawn; or maybe it’s the stag’s horns that sweep skyward. Probably it’s just because they taste so damn good.

I’ve gone after free-range axis deer a few times, and they present a challenging hunt. Like all big-game, and especially exotics, you can sit and wait for one to come to you, but they are ideal candidates for spot-and-stalk tactics. My first stag came on a hunt in South Texas where we were testing some new Winchester ammunition. For two days, my guide and I were repeatedly busted in the thick, thorny brush. It seemed the whole countryside stayed on high alert due to the distinctive warning bark axis deer make when alarmed. On the final morning, we caught this nice stag slipping to cover just before sunup. His attention was fixed on two smaller stags sparring, and that allowed us to close the distance in the dawn light.

South Texas is hot in the summer (as is Hawaii, where I’ve hunted axis deer in the highlands), but it can be the best time to hunt if you’re looking for a trophy. Their breeding cycles put does in heat throughout the year, but for reasons only a biologist can explain, most stags are hard-horned in early summer. Maybe that’s why, as other hunters are already planning for the opening day of deer season, I’m here staring at the axis antlers hanging above my desk.