Sending Turkey Season Out in Style

Midday Gobbler on a Youth Turkey Hunt in Missouri by FieldandStream Maybe I’ve had rougher Sunday mornings, but it’s been... 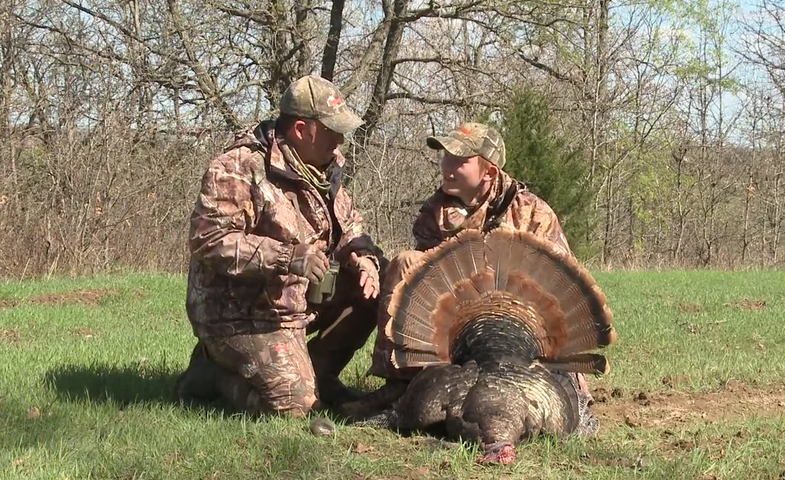 Midday Gobbler on a Youth Turkey Hunt in Missouri by FieldandStream

Maybe I’ve had rougher Sunday mornings, but it’s been a while. I turn on the light over the hotel sink, and my eyes are a deep, rather disconcerting shade of red. I know that I have a drive to Omaha ahead of me this evening, and a flight home late tonight. What I need between now and then is to turn off the light and really sleep. But this will be my last chance to hunt a turkey in the spring of 2016. My buddy Kerry is already pulling on his camo from over on his side of the room. Our corner of the Sleep-Inn is beginning to smell like two turkey hunters with wet boots have lived in it for a week.

“I’m walking down the hall to get some coffee from the continental breakfast bar,” I tell him.

Sunrise comes early and sunset lingers late in Nebraska in May. There are turkeys everywhere, and two turkey nuts like Kerry and me can kill themselves with exhaustion if they’re not careful. Kerry filled his third and final tag late yesterday evening. This morning, we have one tag, my last one, left.

I’ve been after after turkeys since early March, when I started in Florida. All told, I’ve hunted 25 mornings and seen 17 turkey tags filled, along with five misses and various other examples of heartbreak that seemed significant at the time, but not so much now.

The birds are gobbling a couple hundred yards off the field where we’re set up with decoys. Kerry’s camera is running, since our goal is to capture good footage that I can show the bosses and justify another week out of the office. But after a half hour, it’s obvious the birds are working the other way. And my season is running out.

“We could leave this damn camera here, and you could probably slip in there and kill one,” Kerry whispers. I never thought the voice of temptation would sound so much like a Tennessee redneck. After a full minute, I give in, and soon, we’re sneaking down the banks of the Platte River. Not long after that, I’m belly-crawling behind a large dozer pile toward a flock of turkeys 70 yards the other side of it. That dozer pile is where I wait, make a few mouth calls, and ultimately shoot the gobbler that blows into strut 20 yards off the end of my gun barrel. Just like that, I’m free to rest, relax, and change into some dry clothes. There’s a big breakfast and a good nap ahead of me—but the truth is, I could cry because I know it’s all over for another year.

This particular video isn’t from that final hunt of the year (although Kerry and I did film some awesome that I promise to share). Instead, this is the final episode of Cally Morris’s spring, 2016 season of The 15-Yard Files. I think it’s befitting to end things on a high note, same I did in Nebraska, and it doesn’t get much higher than watching a kid skip school to kill his very first gobbler. I hope you enjoy it—and have enjoyed turkey season—as much as I have.