_Michael R. Shea—I call him either Mike or Shea for short—has been a regular F&S contributor, both on the writing... 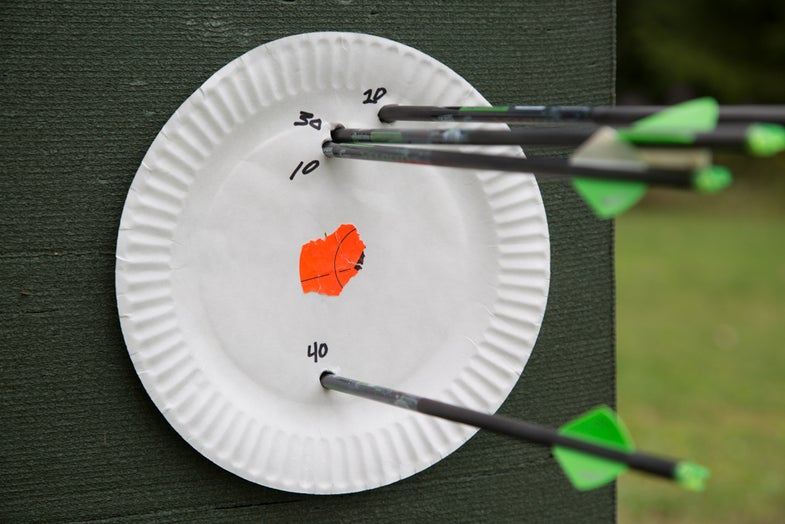 _Michael R. Shea—I call him either Mike or Shea for short—has been a regular F&S contributor, both on the writing and editing side, for years. While I consider myself a fairly tech-savvy bow guy, Shea is eaten up with it, right down to the tiniest hex bolt and micro-adjustment. His debut blog to Tagged Out covers a topic bowhunters have argued over for years__—the 1-pin hunting bow—in a decidedly tech-savvy fashion. __Go for it, Mike. —W.B. _

You’ve probably heard some hotshot at the archery range, or online, claim they can shoot a single pin out to 40 yards. And you’ve probably called B.S.

Plenty of whitetail hunters shoot a single pin to 30 yards, but after that—supposedly—gravity really takes over. But last year when I did an arrow test for Field & Stream, the data showed that a single-pin to 40 yards is very possible, provided you have the right equipment.

For starters, lets talk about Point Blank Zero or Maximum Point Blank Range, a concept that comes to us from rifle shooting. PBZ is the farthest range at which a gun can be fired and hit the vital area of a target without changing the elevation. To visualize this, imagine an 8-inch pipe. PBZ is the max distance you can shoot down the center of that pipe without the bullet arching 4 inches high or 4 inches low.

At the arrow test, this concept was demonstrated loud and clear in the trajectory figures. Using a Velocitip field point, which records arrow performance like speed, energy, momentum, time of flight, and drag (among other things), we collected more than 3,000 data points on 14 shafts, all shot from a Bowtech RPM 360 locked in a Hooter Shooter. The lightest arrow in the test—the Bloodsport Two by Muddy—had a total elevation change of 6.6-inches between zero and 40 yards. So with that setup “the pipe” was 6.6-inches wide. If we’re conservative and say deer vitals are roughly 8 inches, a hunter could theoretically shoot our 30-inch draw, 70-pound RPM 360, with 30-inch Bloodsport Twos and 100 grain broadheads (which added up to 382 grains) and hit vitals every time, all while holding a single pin at center mass.

Most of us, though, don’t shoot 30 inches, or 70 pounds, or super lightweight arrows. So to field test this idea, I changed the draw stops on the RPM 360 to my 28 inches, cranked the limb bolts all the way down (to about 72 pounds), and cut down some Gold Tip Velocity arrows. Five of the six 28-inch, 300-spine arrows finished at 374 grains. The sixth was 378 so I put it aside.

After a few test shots, I set my single-pin slider to 28 yards, which seemed the best center-hold for effectively “shooting the pipe” out to 40 yards. (I used a slider, because 1. It was on my bow, and 2. It made finding that sweet spot easier than twisting Allen wrenches.)

Remember, my shorter GT arrows were lighter than the longer Muddys from our test, and the bow had a higher draw weight. I also could have subconsciously cheated some, by pulling high or low. Try as I did to hold it center, I’m no Levi Morgan.

That said, in a hunting situation I think it would be natural—and subconscious with practice—to cheat a little high at 40 yards and low at 20, which would further shrink that 5.5-inch pipe. If you have a higher tolerance for variability, you could theoretically push beyond 40 by considering a 10-inch vital area, or 12 inches like on elk. Yet this testing of limits only works to a point. Reviewing trajectory results across the arrow test, gravity clearly won at about 50 yards, no matter how light and fast the arrow. Between 40 and 50 all the arrows tested dropped 9 inches or more.

Of course, applying PBZ to bowhunting implies one big assumption—that a hit through the vitals is a hit through the vitals. Experienced bowhunters know that isn’t true. All the blood and guts inside that 8-inch zone aren’t created equal. We’d all rather score center-punched double-lung, than a high single lung—which is easy to do with a high shot at close distance from a treestand. Also, like me, you were probably trained to aim for a single hair on the side of a whitetail, and expect your arrow to go there. It’s a mind shift to go through that same draw process, and then consider an arrow 3 inches off your point of aim a success.

Bottom line is this: modern equipment makes the 1-pin-to-40-yards bow a reality. Testing proves it. Is it the best setup for you in the field? You’ll have to decide that for yourself.