Video by Kerry B Wix / KB Originals Of course you pack along a GoPro and GoPole when you’re bream... 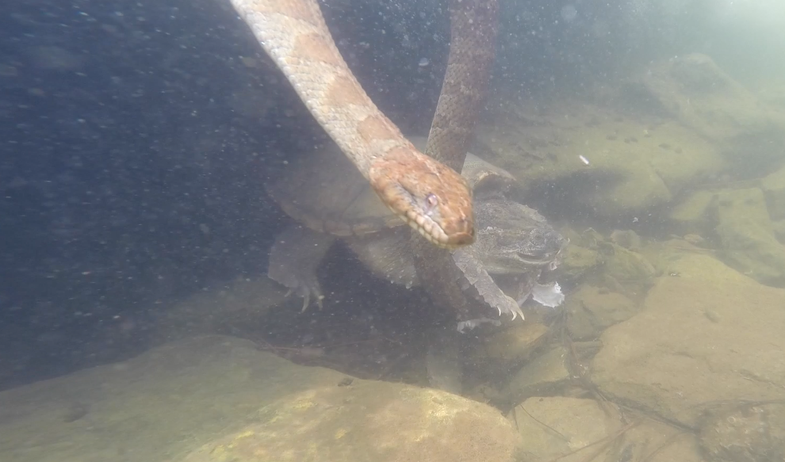 Of course you pack along a GoPro and GoPole when you’re bream fishing. How else would you get awesome underwater footage of a big snapping turtle eating a water snake?

My buddy Kerry B. Wix shot and sent me the above video. If Kerry’s name sounds familiar, it may be because he killed a big Tennessee buck early in the season last year, and I shared that story on Rut Reporters. He’s also a pro photographer and videographer. He filmed my rain-soaked predator hunt back in March with Josh Carney and Byron South.

Kerry and his 9-year-old son, Atley, were bream fishing in a small spillway near Dale Hollow Lake in Tennessee earlier this summer when they noticed a good-sized water snake struggling to climb onto a concrete slab.

“I couldn’t tell what was going on, but you know me—I always have a camera handy,” Kerry says. He rigged up his GoPro and moved closer to investigate. That’s when he saw that a snapping turtle had the snake by the tail underwater—and was eating it. “The video is deceiving; it’s a big snake, and a huge turtle—probably a 30-pounder.”

Kerry says the snake struggled for at least 30 minutes before the turtle finally pulled it underneath the concrete slab where, we assume, he finished eating it.

Being eaten alive tail-first by a snapping turtle would be a hard way to go. But you know, Mother Nature rarely does anything the easy way.