Story (and Video) of a Crossbow Prongalope

Yes, I wrote “prongalope” on purpose. Several years ago, after my first pronghorn hunt in eastern Colorado, Michelle and I... 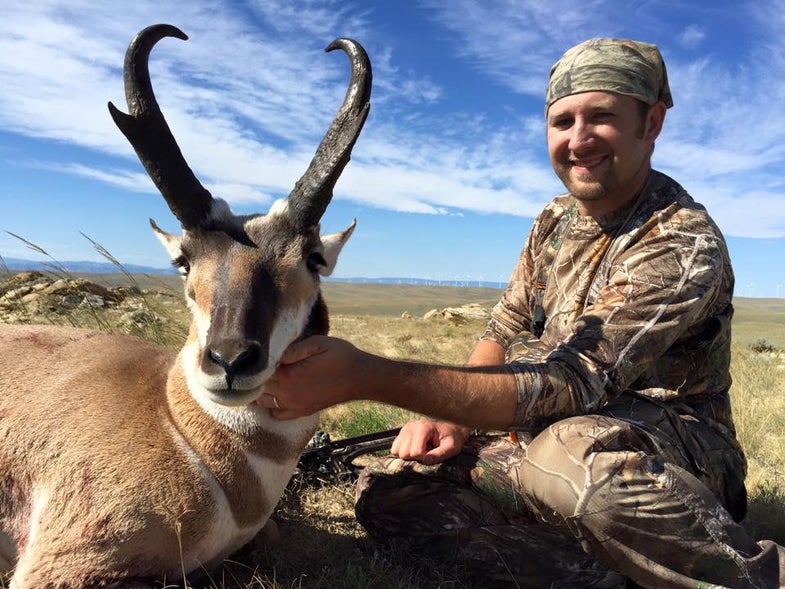 Yes, I wrote “prongalope” on purpose. Several years ago, after my first pronghorn hunt in eastern Colorado, Michelle and I were sitting at the dinner table enjoying some fresh, pan-seared backstrap. “This prongalope is one delicious critter,” she said.

“Prongalope?” I asked. She just shrugged. The nickname made sense to her. Commonly called an antelope, the pronghorn is actually the only surviving species in its family—Antilocapridae. It’s native to western North America, and isn’t an antelope at all (in fact, it’s more closely related to a giraffe).

Yet, it’s so commonly called an antelope that saying “pronghorn” to a Wyoming local will immediately get you branded as a dumb Easterner. Calling it a “prongalope” probably will too, but then again we Easterners—particularly Southeasterners—nickname all sorts of game animals. Nowhere in a book of taxonomy will you find the words “thunder chicken” or “swamp donkey,” but, like them or not, you know what they mean.

Michelle’s nickname was so catchy that I just started using it when saying things like, “I’m going out to Wyoming this August to shoot us another prongalope.” ****

That’s exactly what I did this past weekend. Plano/Synergy—the parent company to Barnett Crossbows—hosted me ****and a couple other writers for a crossbow hunt with Table Mountain Outfitters in one of Wyoming’s early archery units. Though it’s been a wet summer overall, it had been hot and dry in the area for the past month or so. The antelope were hitting water holes like crazy. The five hunters in our group killed ****out by the end of the first day.

We had several new-for-2015 crossbow options for this hunt. I used the all-new Razr iCE, which is an updated, more manageable version of the 2014 Razr (that’s the one with the knife in the stock). Look for a full review of it on the Field Test blog soon. These bows were paired with Grave Digger broadheads—a fixed / mechanical hybrid that initially made me really skeptical—but they performed very well.

I shot my buck a few hours into the hunt that morning. As you can see in the video, he was quartering away just inside 40 yards. The broadhead hit the point of his off shoulder and broke it. It left an exit hole the size of a baseball and a massive blood trail. You really can’t draw a solid broadhead conclusion from a single animal, but for now, I remain impressed with the Grave Diggers, at least for crossbow hunting. I plan to wring them out in a more thorough Field Test review as well. Since they helped me bring a cooler full of prongalope steaks back home to Kentucky, they’re off to a pretty good start.