The Closest Archery Turkey Hunt Ever Captured on Film?

If you haven’t missed a turkey before, your time’s coming. Two winters ago—months ahead of Nebraska’s early archery turkey season—I... 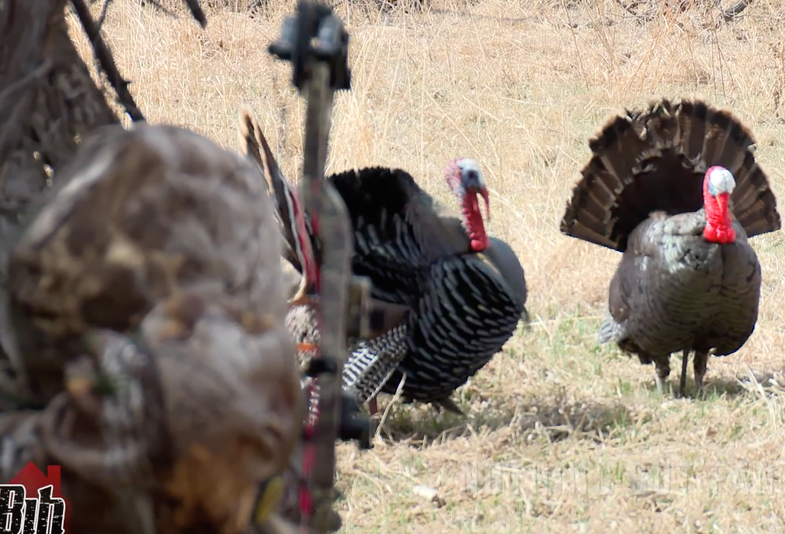 If you haven’t missed a turkey before, your time’s coming. Two winters ago—months ahead of Nebraska’s early archery turkey season—I watched my wife, Michelle, come home from work each day, bundle up in heavy clothes, and practice with her bow in the waning hours of daylight. While her coworkers were planning trips to the beach over spring break, Michelle was going turkey hunting.

We set up the first morning just off a roost area with at least a hundred turkeys—including 20 or more longbeards. Cally Morris was filming over her shoulder, and I was sitting just off to the side, running my own camera. After an hour of heavy calling, a gobbler finally broke from the main group and strutted right into the decoys. When he turned his fan toward her, Michelle drew her bow. I watched the arrow cut a wad of feathers right off the gobbler’s back, but he walked away otherwise unharmed.

“It about brought a tear to my eye, watching how disappointed she was on that video,” Cally said later.

We stuck with it, and later in the day, as we were moving to a new spot, we spotted a group of strutters in a big field off in the distance. We didn’t have permission to hunt that field, so we set up in a nearby creek bottom to do some blind-calling. Within 30 minutes, one of those gobblers slipped in silently and squared off with the jake decoy in our spread. This time, Michelle held her pin just a bit longer and killed her first Merriam’s gobbler. The bird was 4 yards away, and it’s without a doubt one of the closest no-blind archery turkey hunts ever captured on film. I shared a version of it from my angle last spring, but this video is from Cally’s camera, which was running right over Michelle’s shoulder.

“I’d forgotten all about missing that first turkey that morning,” Michelle said the other day, after she watched this full-length video.

That’s precisely the best way to treat a miss. If you keep hunting, you’ll get another chance. Learn what you can from a miss, accept that it will happen again, and then forget about the rest of it. If hunting were full of guarantees, it wouldn’t be nearly as much fun.